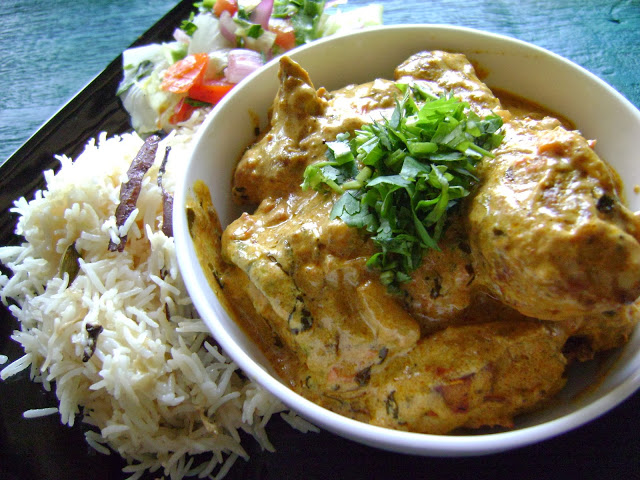 Ever made a mistake that later turns out to be so wonderful, that it soon becomes the norm?
Well, I did something like that and it turned into one of the most creamiest, yummiest curries I’ve ever had! I was making my usual chicken curry, you know, the Methi Murg, and I go into the fridge looking for curd, and I realise, I don’t have any. Now, that doesn’t seem like such a bad thing because not all chicken curries must have curd in them. But the problem here is that I added a little too much spice, factoring in the yoghurt at the end. Adding tomatoes to reduce the heat will just make more gravy and over power the flavour of the chicken. And we don’t want that now, do we?

So I racked my brains, and that’s not a fun thing to do while the chicken is probably overcooking itself waiting for the non-existent curd to join in. And my eyes fell upon a forgotten carton of fresh cream (forgotten, but not yet past its expiry date, mind you)!

I added the cream, one spoon first, then another, and slowly the rest of the carton.

Now I must describe this curry: It was so creamy and so rich in spices, that my fingers tingled in joy well into the afternoon and I could still feel as though the rich curry was making its way down my throat, even though it was hours past lunch was over! Ahhh….t’was was a good day.

You will be needing

– Marinate the chicken for about a half hour with the ingredients for the marinade.
–  Heat oil in a pan. Fry the chicken over a high flame till it is just seared to golden brown perfection on the outside. Not really necessary that it should be fully cooked on the inside. Do not crowd the chicken in the pan. Otherwise it will not turn brown. Lay the meat in a single layer in the pan. Flip it often to sear it evenly.
– Add the onions and green chilli to the chicken. Cook over a low flame till the onions soften.
– Add the ground spices (red chilli powder, chicken masala, garam masala and cumin powder). Add salt to taste.
– Stir to combine and cook till the spices are free of their pungent odour.
– Add the tomatoes, stir, cover and cook over a low flame, till the curry is formed and the chicken is cooked to perfection.
– Add the lime juice.
– Add the cream. Stir well.
– Add the kasuri methi. Adjust seasoning.
– Cover and let simmer over a low flame for about 5 minutes.
– The curry will thicken, the cream will work its magic and spew oil and richness.
– Garnish with chopped coriander. Serve hot with rice or roti.