Try these {VEGAN} Baked Falafel smothered in a spicy Cilantro Yogurt Sauce all stuffed into a warm Pita bread pocket!

It thrills me to no conceivable end when I find Indian recipes in other cultures. I might be entirely wrong in saying that, because those recipes could have been introduced to India by invaders and traders, but you get the gist. I love walking into a restaurant, trying something new that I’ve heard of, but never had, and it tastes like something I grew up eating! The surprise on my face as the connection dawns on me

Do you remember my earlier post on the African (Nigerian) Akara fritters, which turned out to be very similar to the South-Indian Medu Vada (Fritters made with ground black lentils) – but instead of the black lentils, the African version uses black-eyed peas.

This is just like that, except I did not see this on TV, but realised the connection as I was biting into it. Falafel is a common name you hear when it comes to street food, so naturally, when I walked into a Mediterranean restaurant, along with their juicy kabobs, I had to order some falafel as well. Imagine my surprise when I bit into it and it tasted exactly like a South-Indian masala vada!

Made with soaked chickpeas (which is essentially just Bengal gram/channa dal), flavoured with cilantro and/or parsley,  garlic, red chillis, cumin and onions – sound familiar? – the falafel, while sounding middle eastern, is so familiar, once you get to know it.

Indians – as a group, having raised in a culture rooted in its traditions, are generally apprehensive about trying foods outside their native cuisine. While that is largely and rapidly changing now as the country and its people opens itself willingly to the outside world, the larger majority of the population still remains closed. And when they travel, they feel locked in, deprived of their regular spice palette, and tend to hate all other cuisines unequivocally.

I think that finding these common culinary denominators will help ease their minds and help open them up to trying new things.

This Falafel is a baked version, which means that you can probably bake the South Indian Masala Vada too. A revelation, if you ask me, finding out that a classic deep-fried breakfast/snack food has the potential to be actually healthy.

And it’s so simple too! Just grind all the ingredients, roast, bake!

Serving suggestions:
Falafel, while good enough on its own, has the potential to becoming a complete meal, if served stuffed inside a Pita bread pocket, or naan or rotis, with a drizzle of sauce (usually tahini-based) and fresh vegetables like tomato, onion, bell peppers, lettuce, cilantro/parsley. 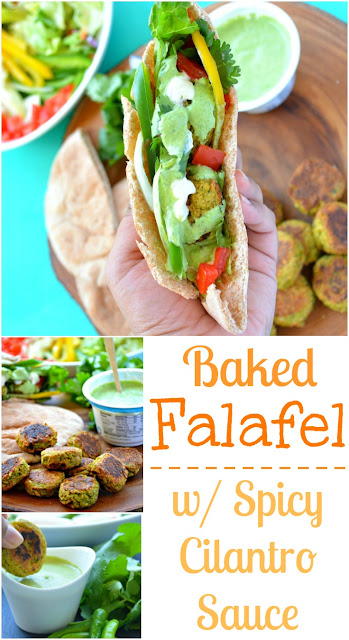