Ever since my best friend from college forced me to watch a Japanese drama in 2006, I’ve been hooked!

This is the quirkiest of them all that I watch sometimes just for laughs. The story is about a girl (the black-haired kid in this video) who disguises herself as a boy and enrolls into an all-boys school to secretly help a student there who saved her life and ruined his. Like I said, quirky. But please don’t judge all Japanese dramas (and me!) based on this one. There are some really good ones too! Trust me, I promise. If you want to try one, start with Hana Yori Dango. It’s my absolute favourite!

Anyway, in this scene, they go to an Okonomiyaki restaurant and I got curious – the first time, I paid attention to the conversation and the times after that, I just kept trying to figure out the food.

These savoury pancakes are sold in special Okonomiyaki restaurants all over Japan. It is a popular ‘hang-out’ food, and is usually frequented by groups of people looking to have some casual fun. The setting is completely informal, and patrons are generally required to cook the food themselves, as every table contains a ‘teppan‘ or grill for you to work with.

At the counter, you pay and select the ingredients from a menu. The ingredients are added to a standard mix of flour, egg, nagaimo (sticky yam), dashi(fish stock) and shredded cabbage. With this as the base, you can make infinite combinations with ingredients ranging from meats, a variety of seafood, sticky rice, vegetables, herbs, cheese and fermented soybean paste creating a new Okonomiyaki each time.

Types of Okonomiyaki
One type is the Osaka style – where all the ingredients are mixed together and grilled. This is the most common, especially in Tokyo. The other is the Hiroshima type, where the pancakes are made separately, the ingredients grilled separately, and just combined as layers at the end and served with yakisoba noodles.

No matter what style it is, they take a long time to cook, and the flipping takes a lot of practice. So it’s kinda fun to have them with a lot of friends  where you can laugh at each other’s mistakes, and kill the wait time with pleasant conversation.

How is it made?

Normally, an Okonomiyaki starts with the flour/cabbage base, mixed thoroughly with the ingredients of your choice. It is dumped on the grill and cooked until the bottom is well-done and ready to be flipped. Once ready, mayonnaise and Okonomiyaki sauce are drizzled on top from a squeeze bottle in a zig-zag pattern. The Okonomiyaki is then topped with Aonori, which is dried seaweed flakes (looks like lime zest) and Katsuobushi (also called Bonito flakes), which is just dried Tuna that is shaved to resemble pencil shavings. These Katsuobushi are so delicate that as soon as it is placed on the hot grill, they wiggle and move as if alive, creating a beautiful display of motion.

Watch how it’s made by an Okonomiyaki restaurant staff in Tokyo:

Since the dish is so flexible, I decided to create my own, using ingredients familiar to me sans meat and sans seafood. It’s almost fully vegetarian, except for the egg. Oops! 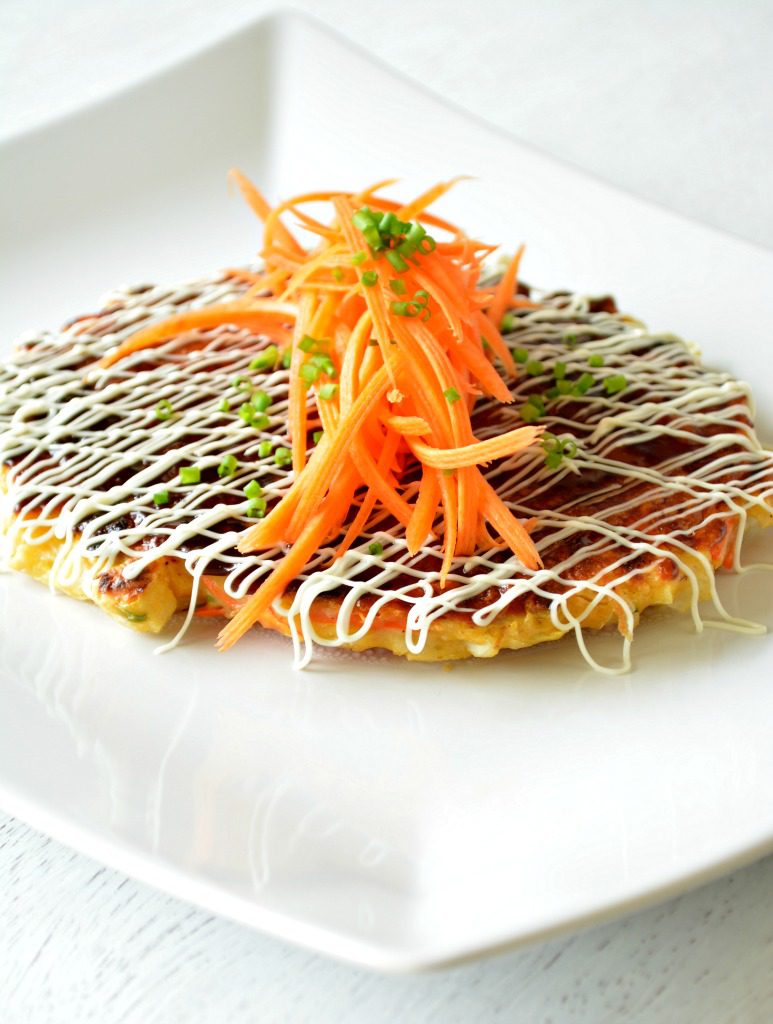 Instead of the pork belly slices, I decided to use finely slice potato slices instead. 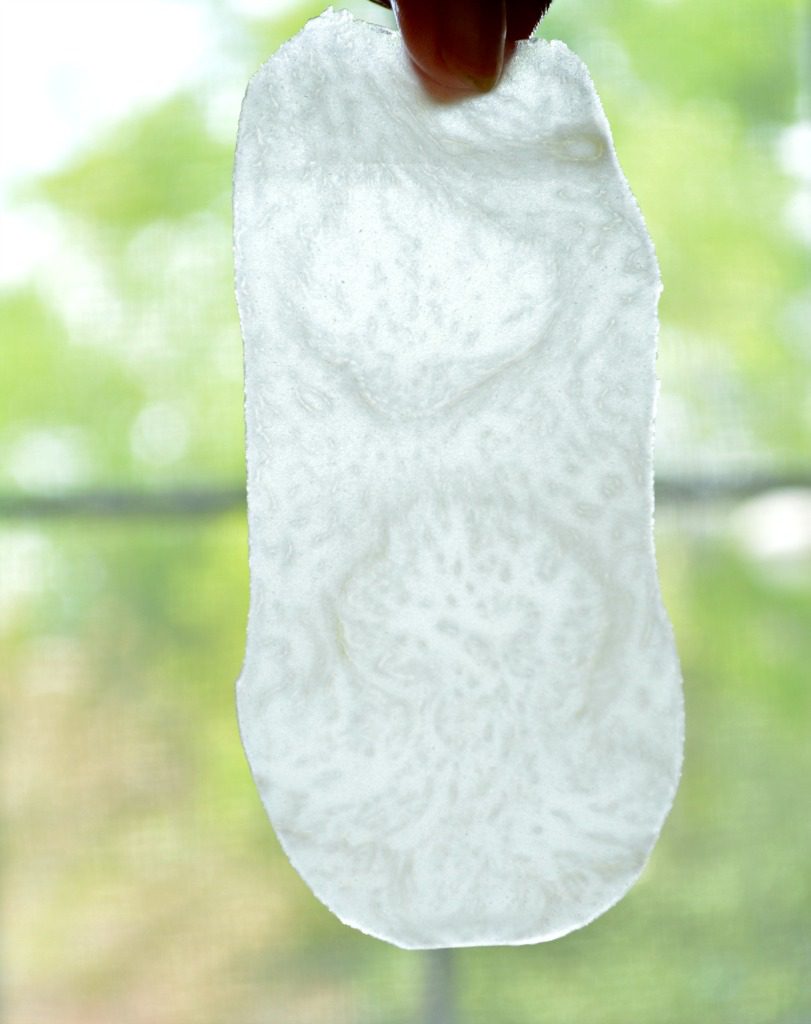 So this is my version of the Japanese Okonomiyaki. Don’t be offended if it doesn’t look or taste Japanese, because I am at full liberty to ‘cook it as I like it’.

Fair warning – These pancakes are delicious, but quite heavy, and I was hardly able to finish half of one pancake. So plan accordingly. 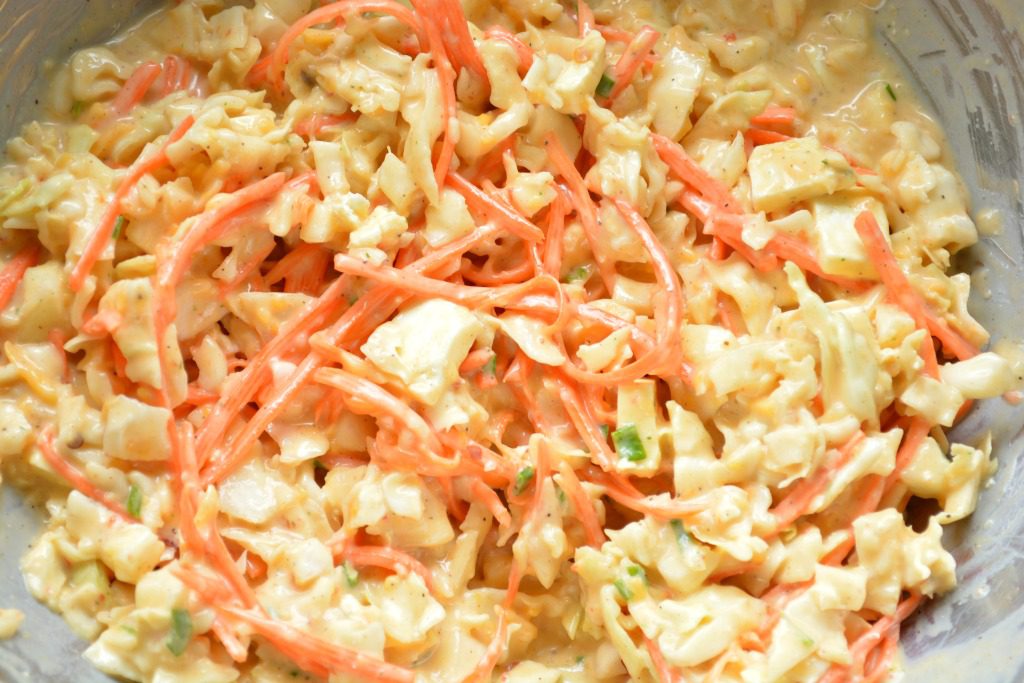 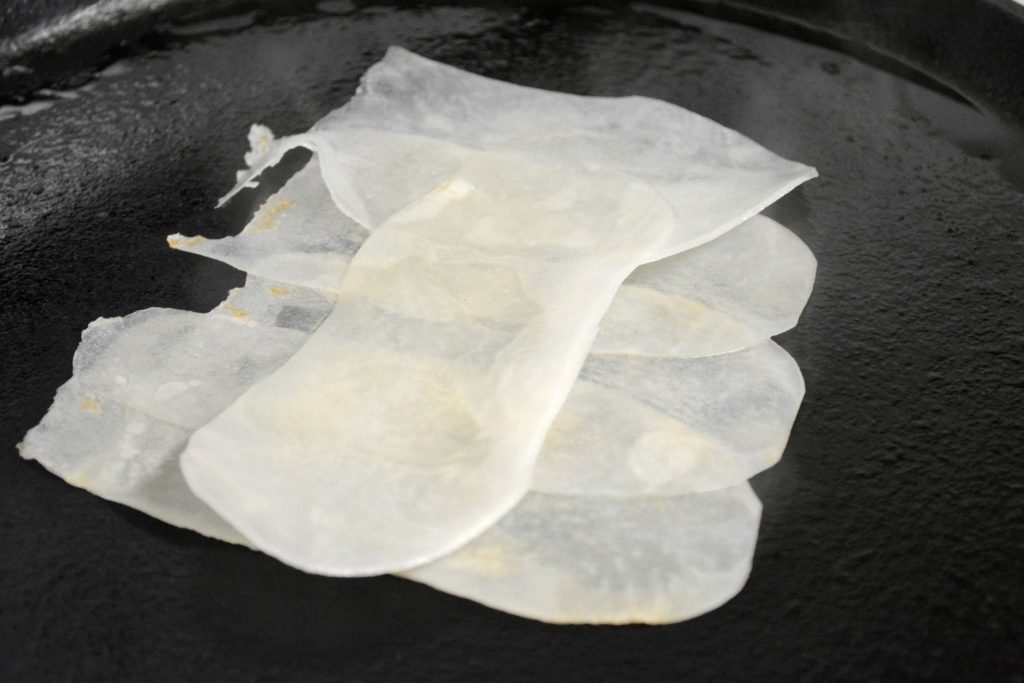