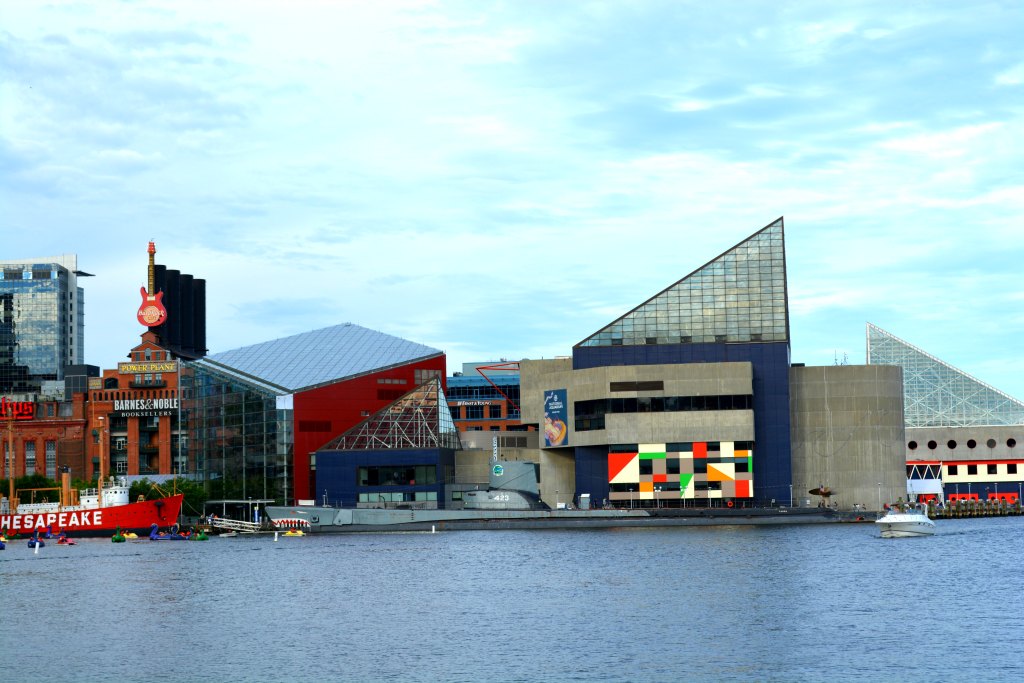 There are so few holidays in a year, that when a long weekend creeps up on you, there’s so much pressure to do something worthwhile with the time given to you. This 4th of July weekend, my husband and I spent time with our friends in Baltimore. And the Baltimore weekend was GOOD!

Baltimore is the largest city in the U.S. state of Maryland and holds forever the honor of inspiring the country’s National Anthem ‘The Star-Spangled Banner’. It felt very apt that we spend the 4th of July weekend at a historic place of such immense significance. And hence, our first stop was at Fort McHenry – the place that caused Francis Scott Key to proudly write – “Oh, say can you see, by the dawn’s early light….. Whose broad stripes and bright stars, through the perilous fight…” 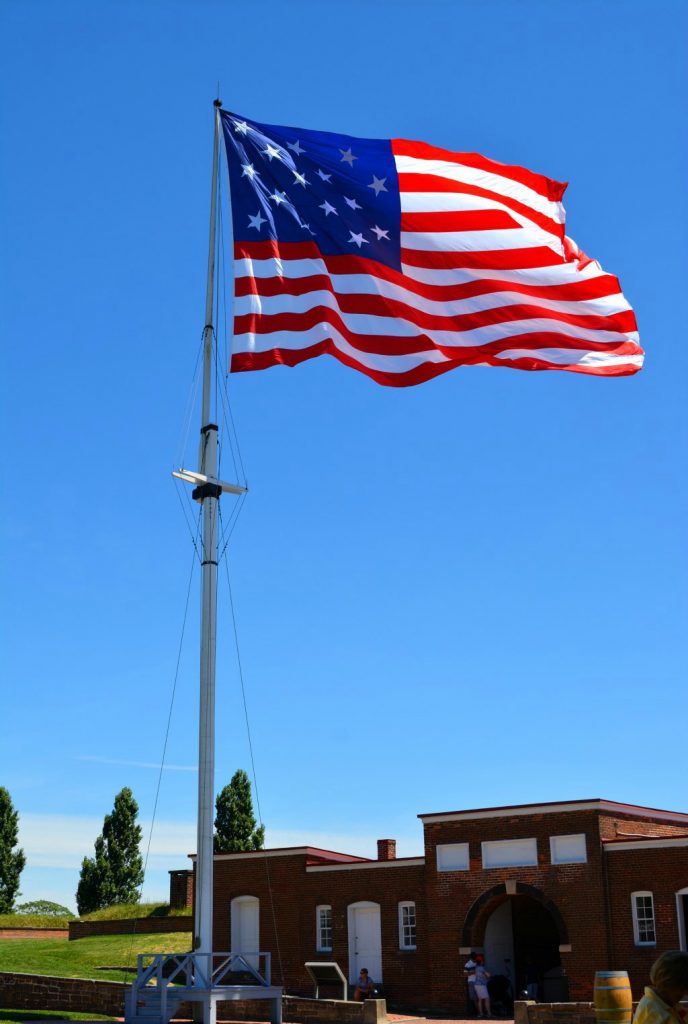 The star-shaped coastal fort was built in 1798 and made history when it defended the Baltimore Harbour from the British Navy in 1812, all through the night under pouring rain and canon-fire. As the morning dawned, Francis Scott Key, who was on a ship amidst the enemy ships, having set out on a diplomatic mission to negotiate the exchange of prisoners with the British, watched through his telescope, to see if the Fort had fallen overnight to enemy hands. And what joy when he saw the American flag still flying proudly over Fort McHenry! The sight caused him to write the poem ‘Defence of Fort M’Henry’ that was later set to the tune of ‘To Anacreon in Heaven’ – and this song spread like wildfire and was sung all over America in every home and bar and gathering, later becoming known as the Star Spangled Banner, the national anthem of the United States of America.

When we visited, there were actors in historic garb getting ready to an enactment of the War of 1812. We were allowed entry into the different rooms in the fort, a museum that contained several of the war’s artifacts, including the original flag and mast that was flown over the fort in 1812. I am a museum buff and I was thrilled to seeing the objects that had once witnessed history being made.

If you didn’t care about the history, you still should visit Fort McHenry for the beautiful views of the Chesapeake Bay. The day was bright and blue and there was ample park space for a picnic or a jog along the bay. 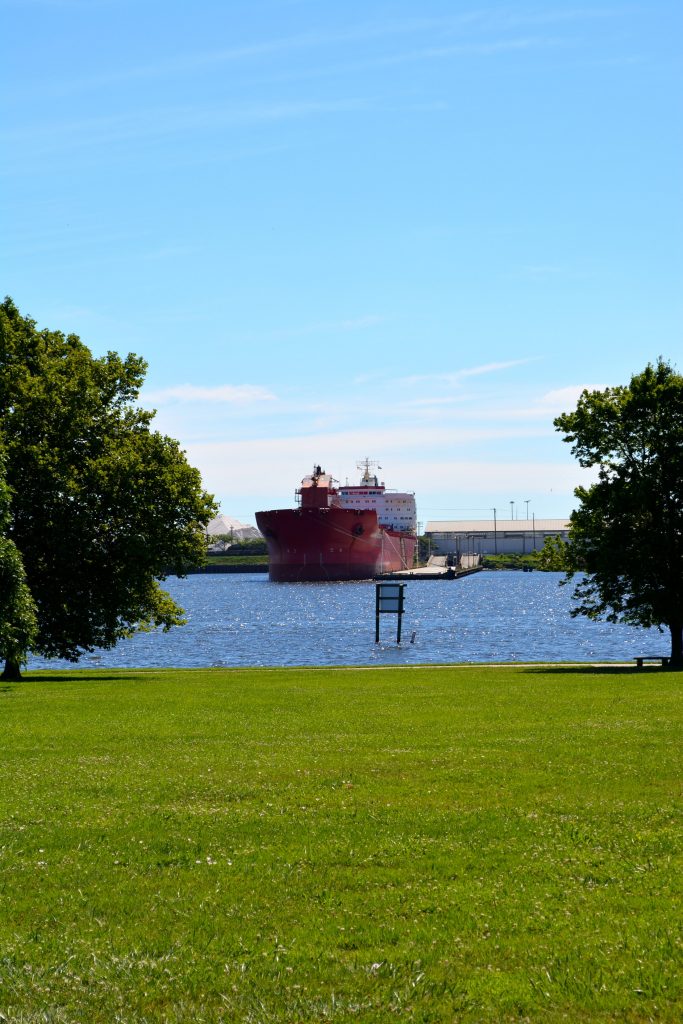 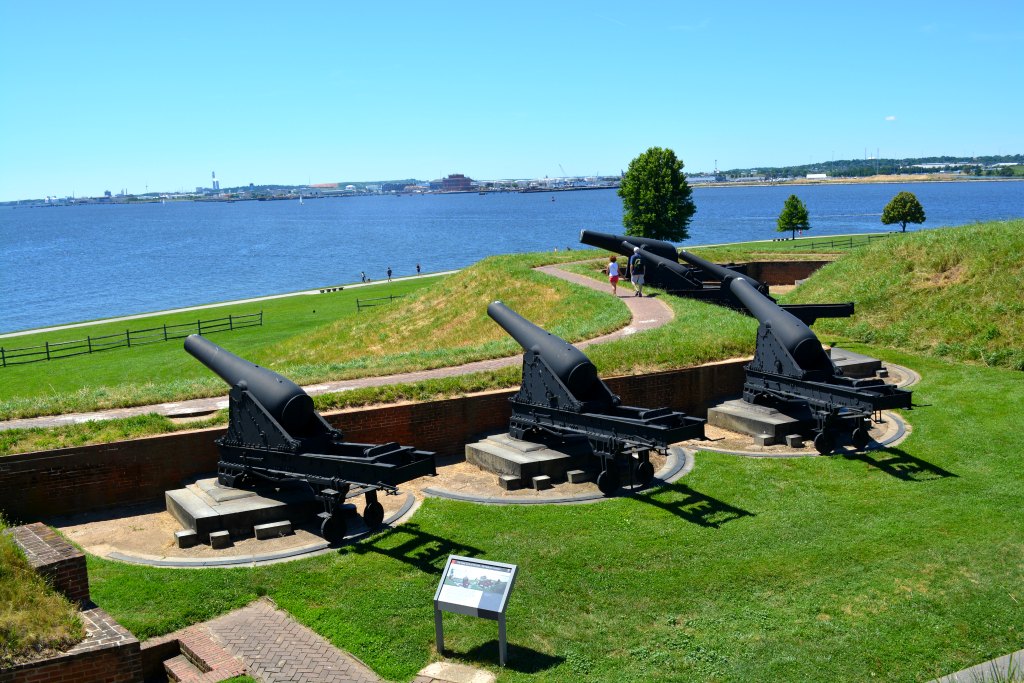 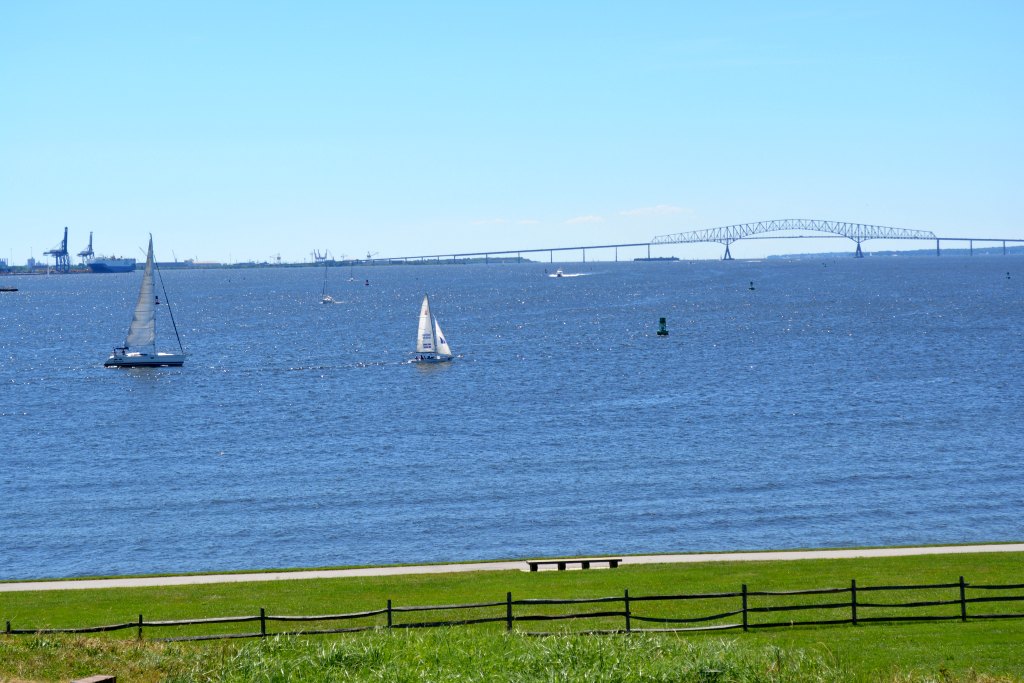 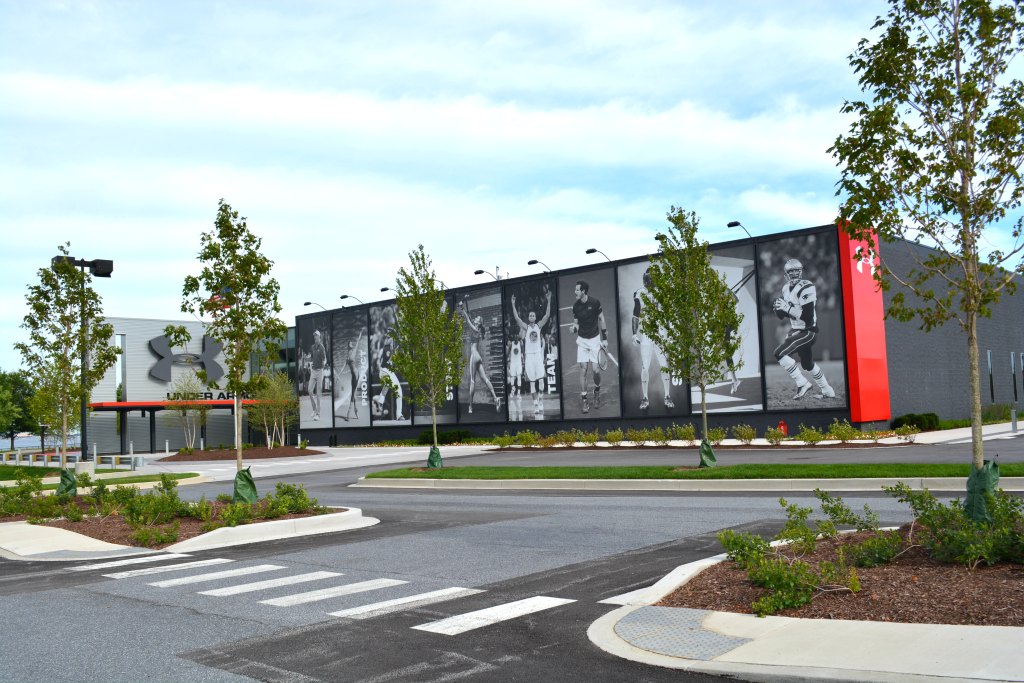 Our next stop was at Under Armour – that’s right! The sports clothing and accessories company!!! Our friend works there and we got an exclusive weekend pass to see the new office building. Do you know how much fun it is to go to the office on weekend? There is no one there, and you feel like you own the place! 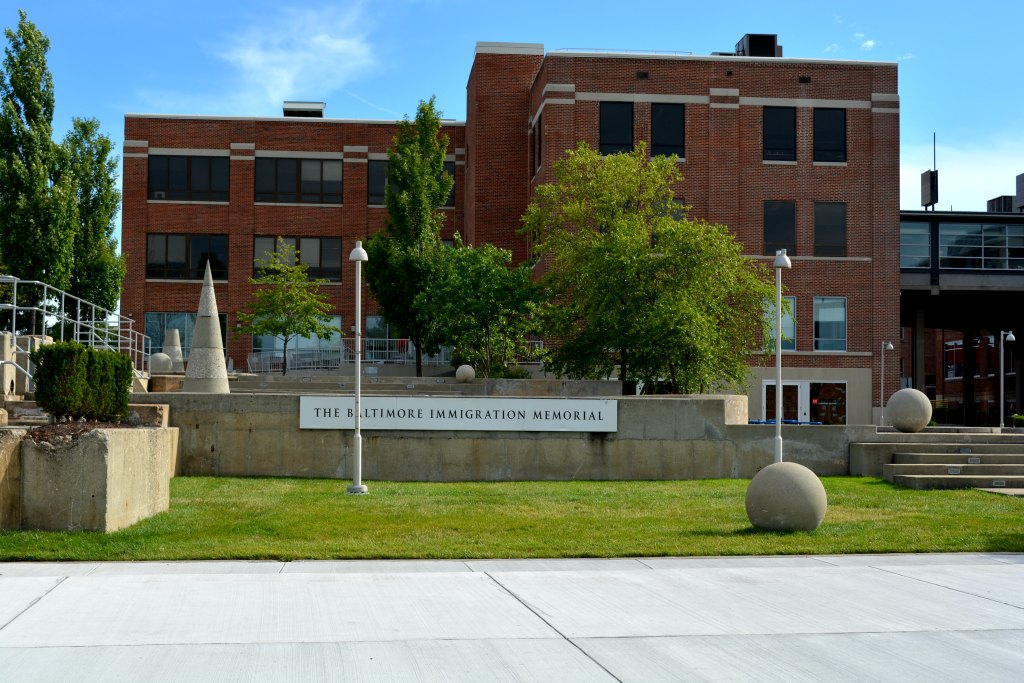 We also stopped by the old office, which happened to hugging the Baltimore Immigration Memorial (the brown building in the background is the old Under Armour Office). I had only heard of immigrants coming in through Ellis Island in New York, but in the 19th and early 20th century, Baltimore was the third largest immigration port in the United States, behind New York and Boston, welcoming about 1.5 million people. 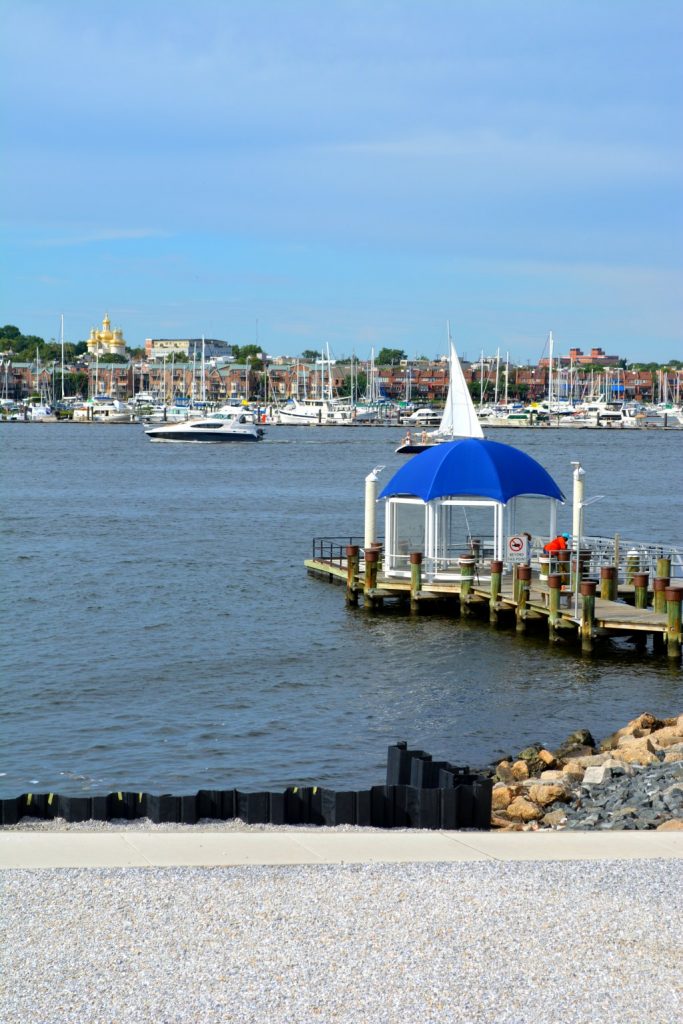 Through these piers walked the forefathers of so many millions in the country right now, mostly Germans, Polish and Jewish.

We ended the day with a pleasant walk down the Baltimore Inner Harbour.

For those of you who have seen the Tom Hanks movie ‘Forest Gump’ would know the significance of the Bubba Gump Shrimp Company.  This restaurant chain was inspired by the movie and has over 40+ restaurants worldwide.

I saw the Bubba Gump sign, and couldn’t help but yell “Run Forest, run!”. Just because I don’t eat seafood, doesn’t mean I can’t have a little fun! 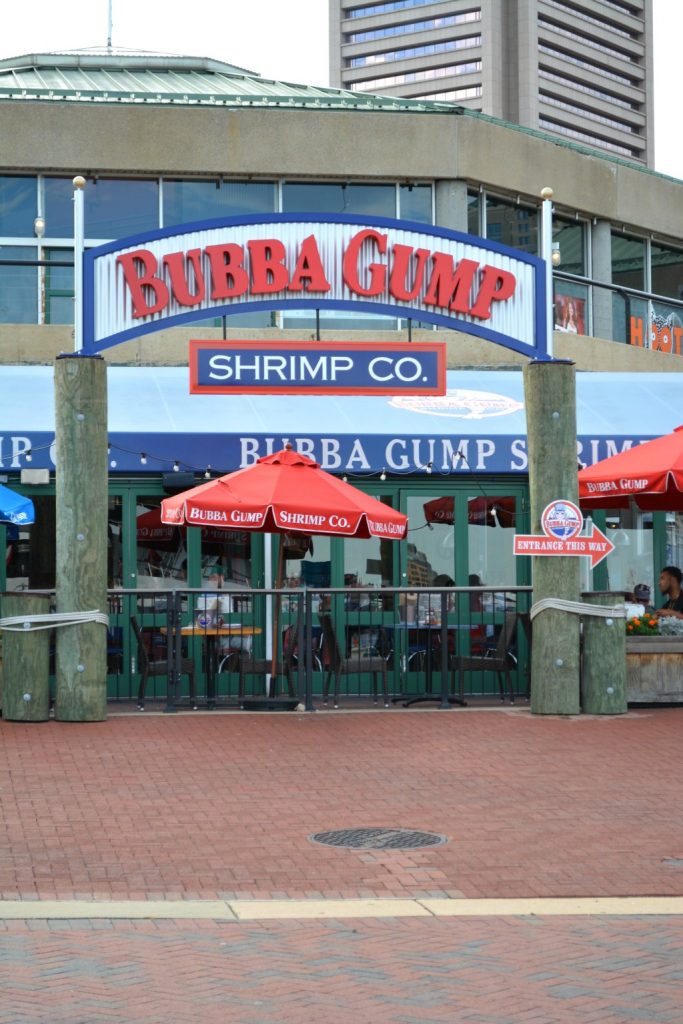 As you walk down the harbor, the cool evening breeze carries with it the sounds of guitars, saxophone or flutes from musicians who’ve set up posts along the boardwalk.  And if that’s not entertainment enough, there are street performances – like this guy, Evan who was juggling a knife, flaming torch and a bowling ball while balancing a skateboard on a cylinder.

You can check out Evan’s website Kapow and ask him if he’s performing in a city near you!!! He’s based out in Lancaster, PA and very-friendly. Go say Hi when you see him! 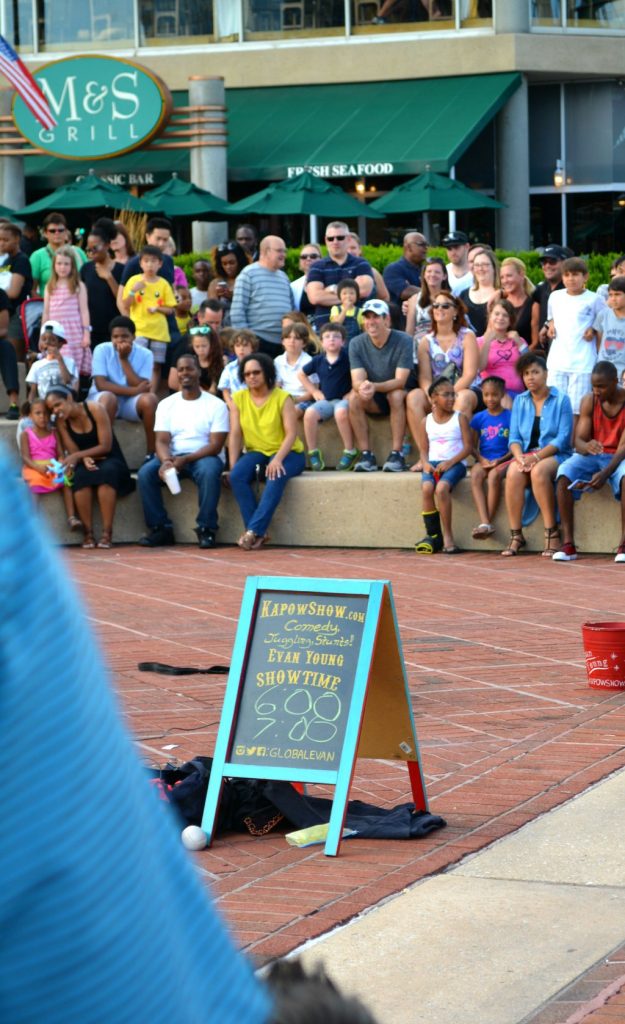 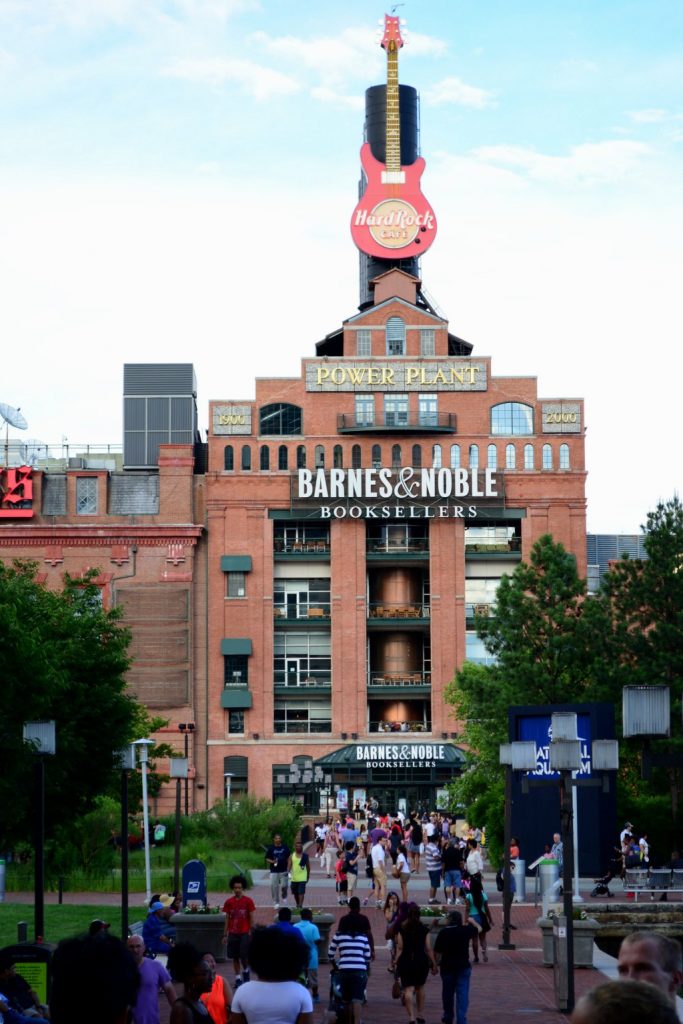 The only thing left to do was grab dinner on the way home. And we went to &Pizza!

Originally started in DC, and now in Maryland and Virginia, it’s a make-your-own pizza place. You walk down an assembly line (kinda like at Chipotle) and start with a dough-base, pick out a sauce, type of cheese, protein toppings and it goes into the oven. As it comes out, you can top it with more ‘finishes’ – including dressings, more sauces, cheeses and more! And no matter how high you pile up the toppings on your pizza, it’s gonna cost you just $10 !!!

So for my pizza, I had an ancient grain crust, with a spicy tomato sauce on one half, and garlic ricotta on the other. Shredded blend of cheese, grilled onions, jalapeno, roasted red peppers, spinach and chickpeas. When it came out of the oven, I finished it with goat cheese, sun-dried tomatoes and fig balsamic vinegar.

And my pizza was MAGNIFICENT! It was sweet, spicy, tart, creamy and insanely delicious! 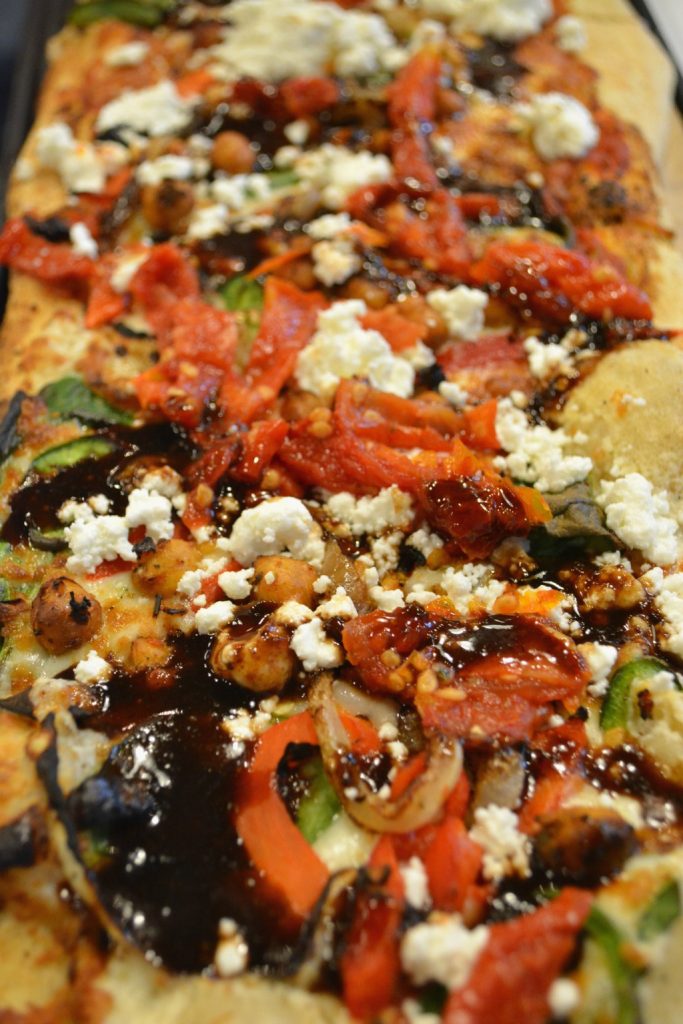 These are what my friends had:

This one had a spicy tomato sauce base and finished with arugula and garlic sauce. 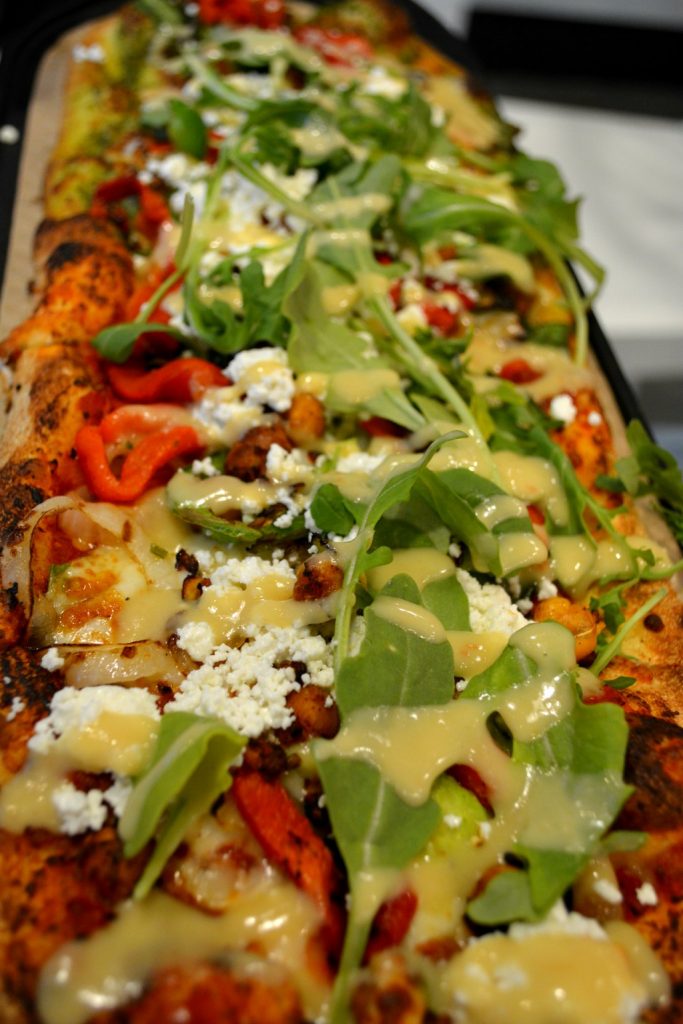 This one had a basil pesto sauce – see the lovely green?

This one below has olives and Parmesan. 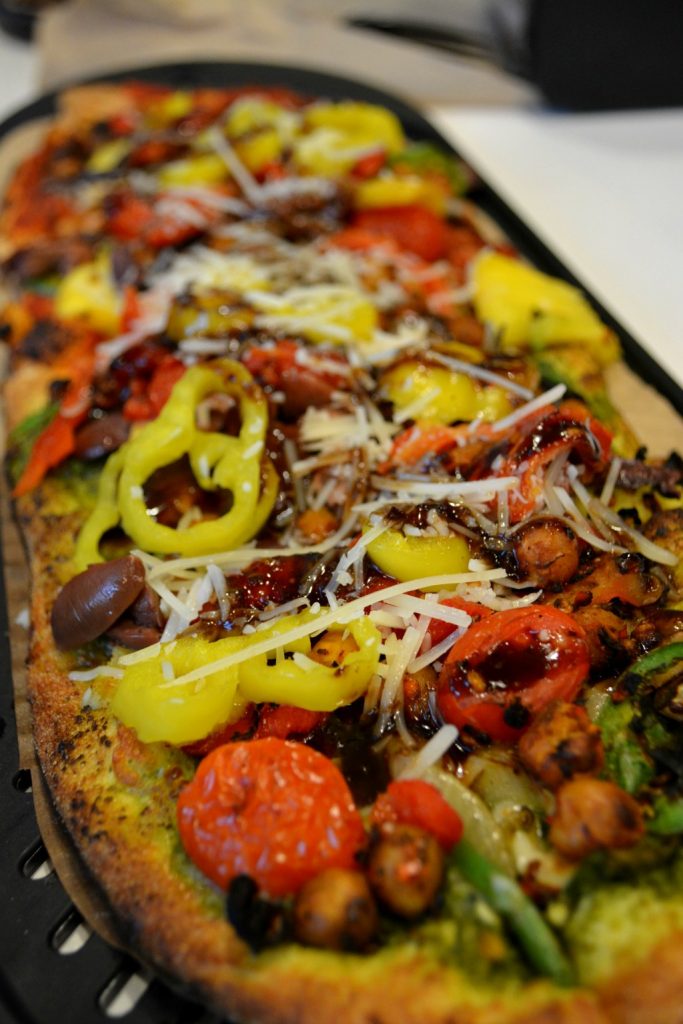 One pizza will feed a very hungry person with a large appetite (like my husband!) – I was able to eat about half and save the rest for the next day. No regrets about that!

The next day we began bright and early and had breakfast at Chocolatea. Don’t you love that word play!

It was a tiny, but beautiful breakfast place with an array of teas and hot chocolates. I had a Mayan Choco-latte, which was rich, creamy and spiced up with a lot of cinnamon. So much that there was a level of ‘heat’ to the chocolate. I also tried a DELICIOUS Banana split Choco-latte – which tasted a lot like Nutella-Banana French Toast Roll ups. 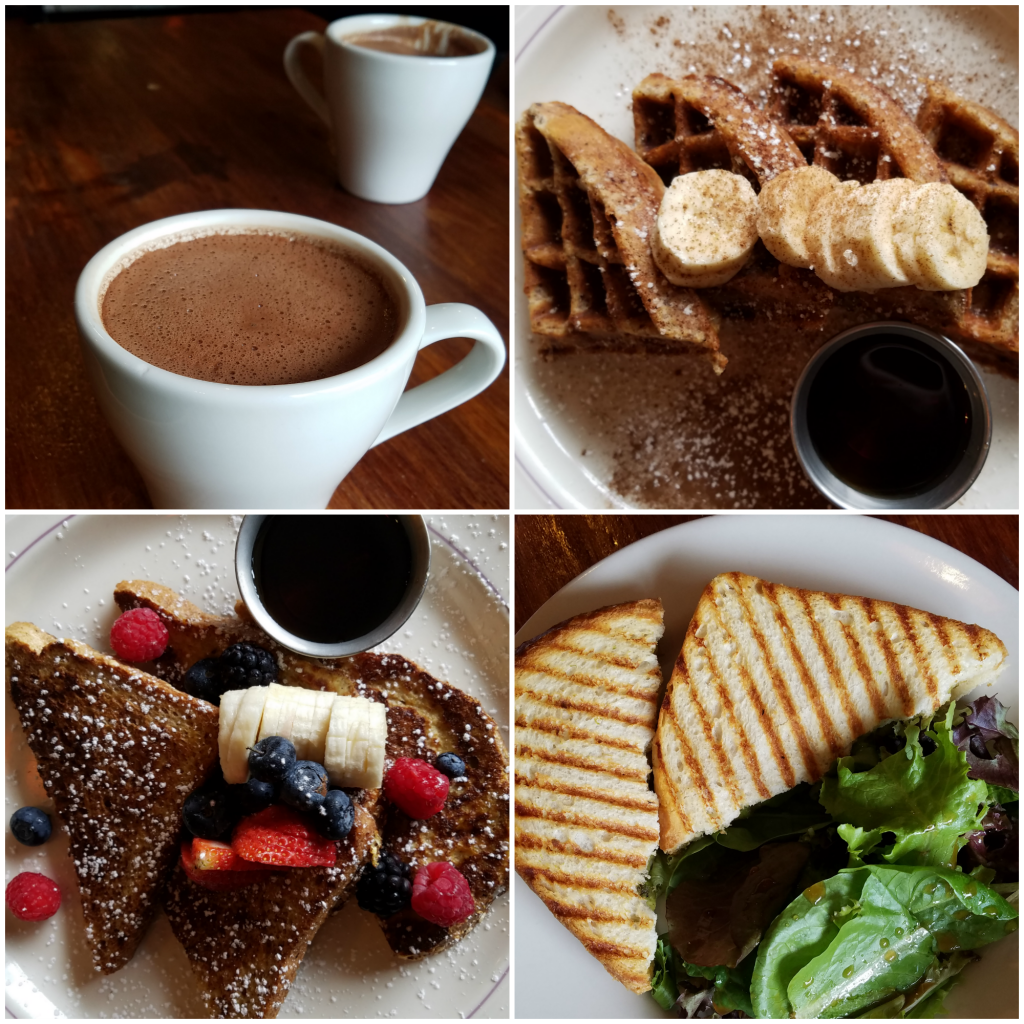 There are 4 Historic ships docked at the Inner Harbor for public viewing. You can see one ship for $11 or all 4 ships for $18. Pretty good deal, huh? Sadly, we only had time for one ship, but even so, since the tickets were transferable, we bought the 4-ship package and left the tickets with our friends to give to someone else. 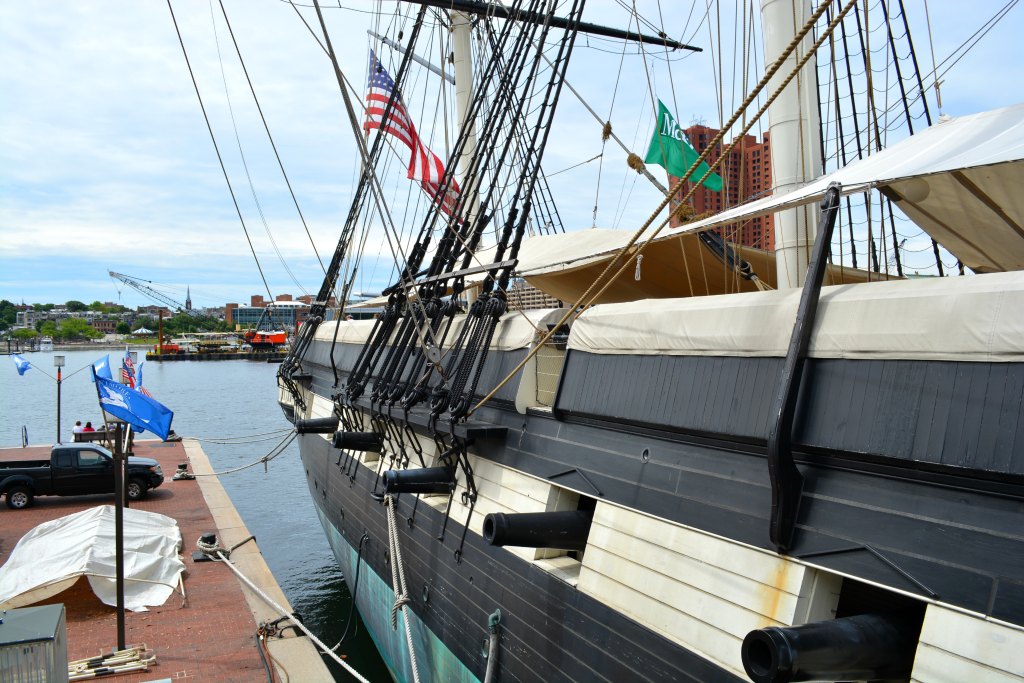 You can read more about the history of the USS Constellation here.  All 4 decks are open to the public – the top deck or spar deck , the gun deck below with cannons and the captain’s cabin, then comes the berth deck where the rest of the crew lived and below that, is the ship’s hold where the supplies for all 300+ crew members were stored.

During the visit, we also had a chance to witness a ‘gun drill’ – where we saw a cannon being fired, and we also participated in the drill a little. It was a lot of fun, hilarious even – a Pirate themed cruise ship went past us firing their water cannons and yelling insults and the guy conducting the gun drill was like “yeah, yeah real cute toys you got there – one of these days I’m gonna ‘accidentally’ get ya with my real cannons’. 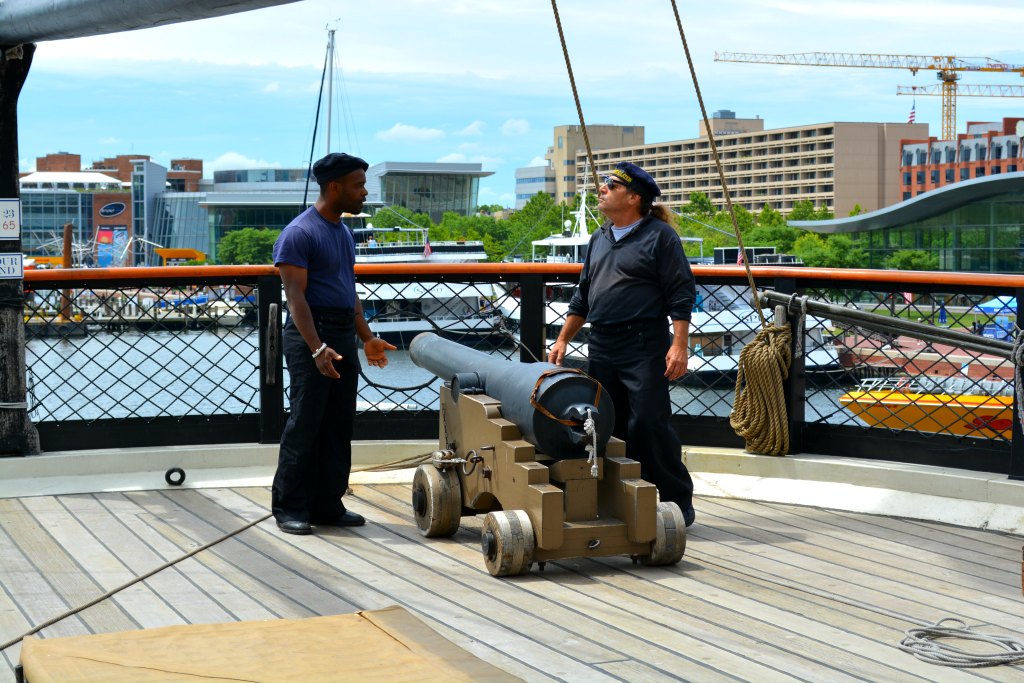 I’m the second in line here… we were moving the cannon nozzle (weighing a little more than a ton) to point outside the ship – if you miss this step, you risk damaging your own ship – kinda like shooting yourself in the foot. 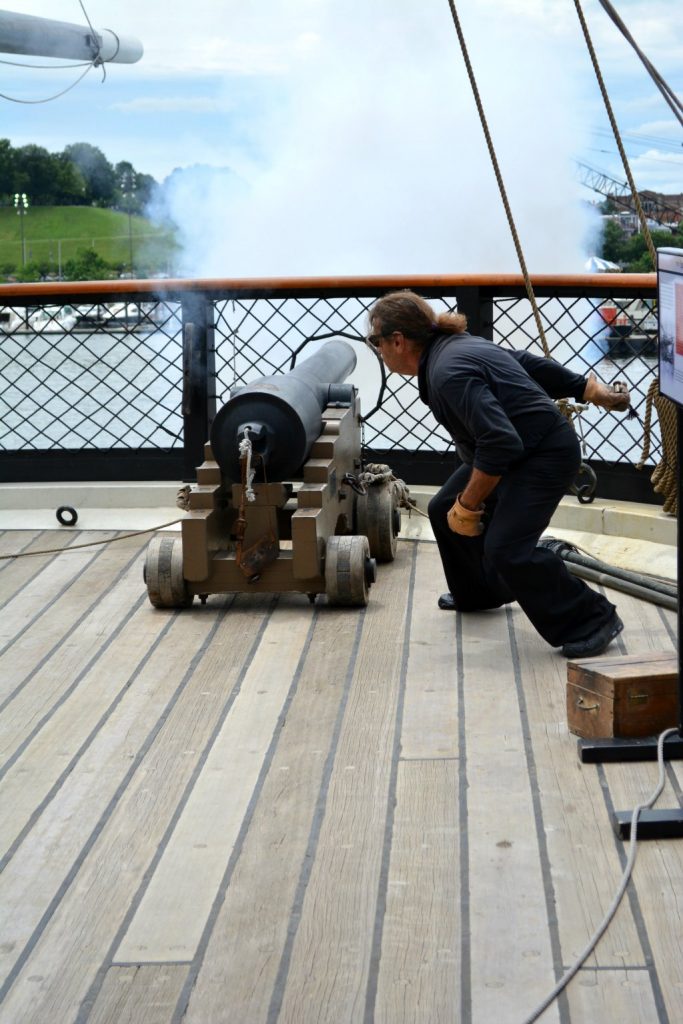 This here is the Gun Deck. 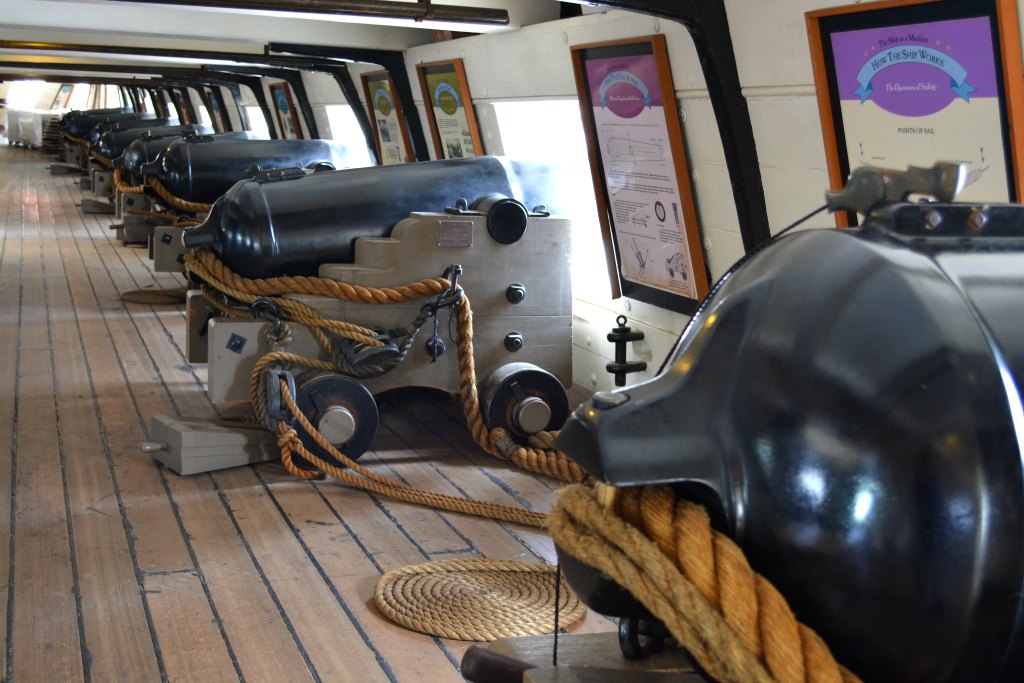 The Berth Deck – imagine sharing this gloomy space with 300+ men… 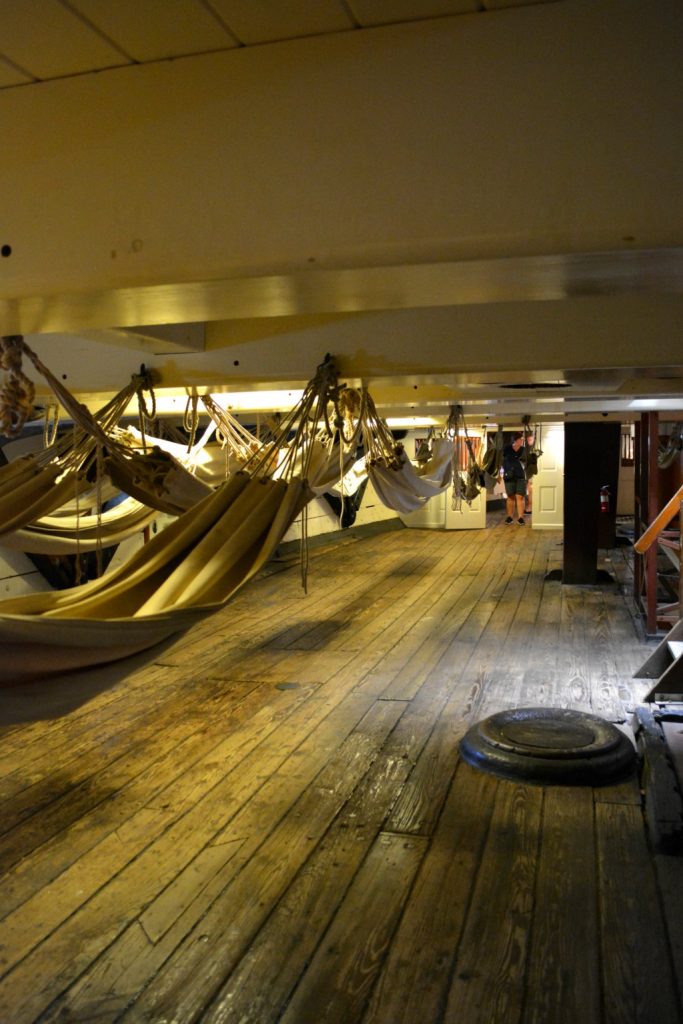 The Ship’s hold. At this point, you are basically underwater. 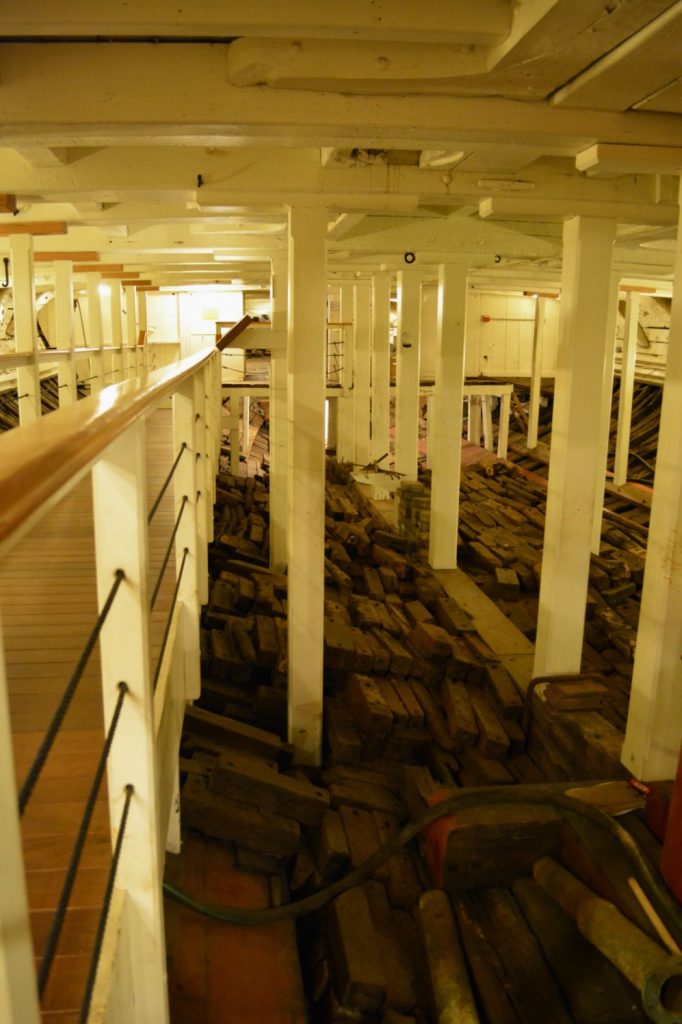 It was a very humbling and beautiful thing to be able to walk through the decks, put yourself in the place of the crew – sailing across the oceans for years at a time, cramped up with 325 men with limited space and food – the food supplies could get infested with maggots, rats and other vermin. At the beginning, the crew would break apart the bread and pick out the maggots, but over time they got used to the taste, even appreciating the flavour they rendered the stale food.

I ate my lunch with a little more gratitude that day.

A short hike (about 1 mile) from the parking lot would take you to this beautiful Falling Branch Falls with its cool, cool shallow waters that you can take a dip in. 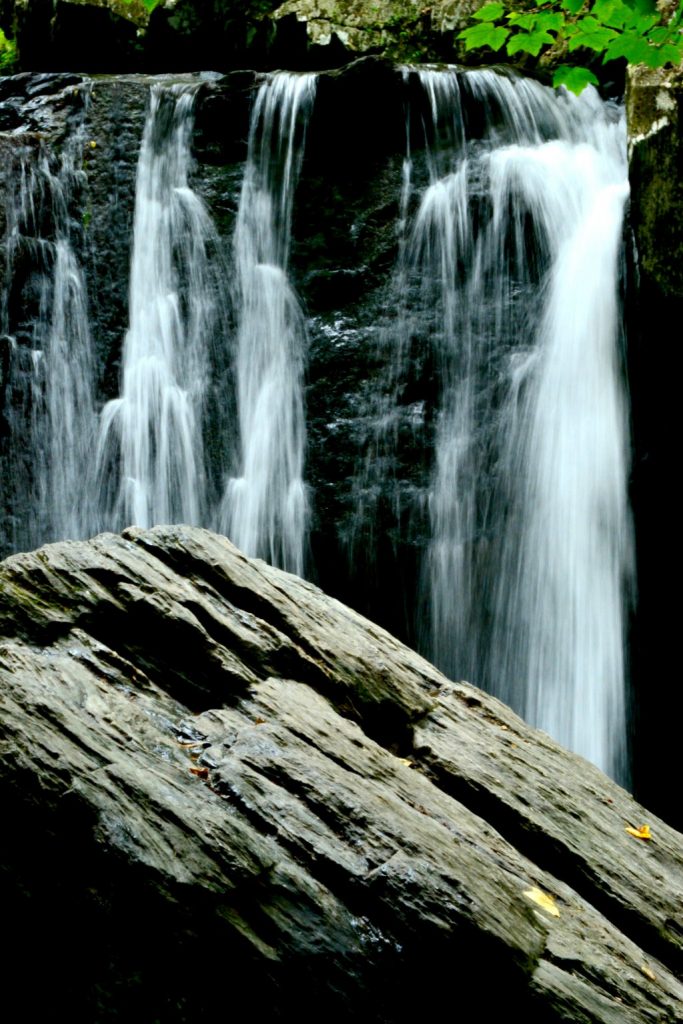 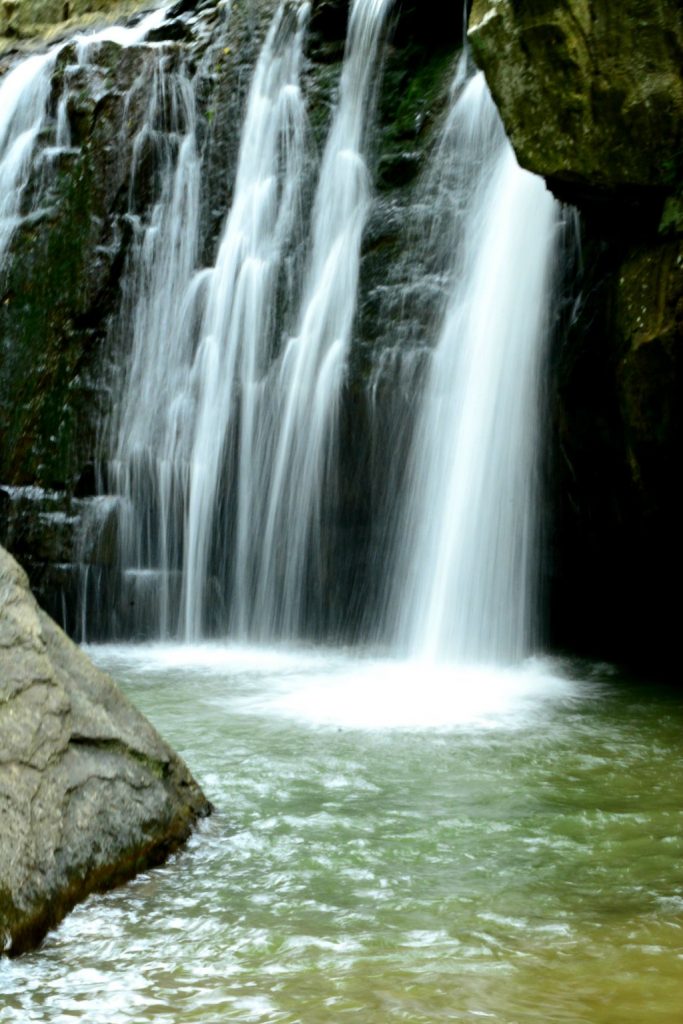 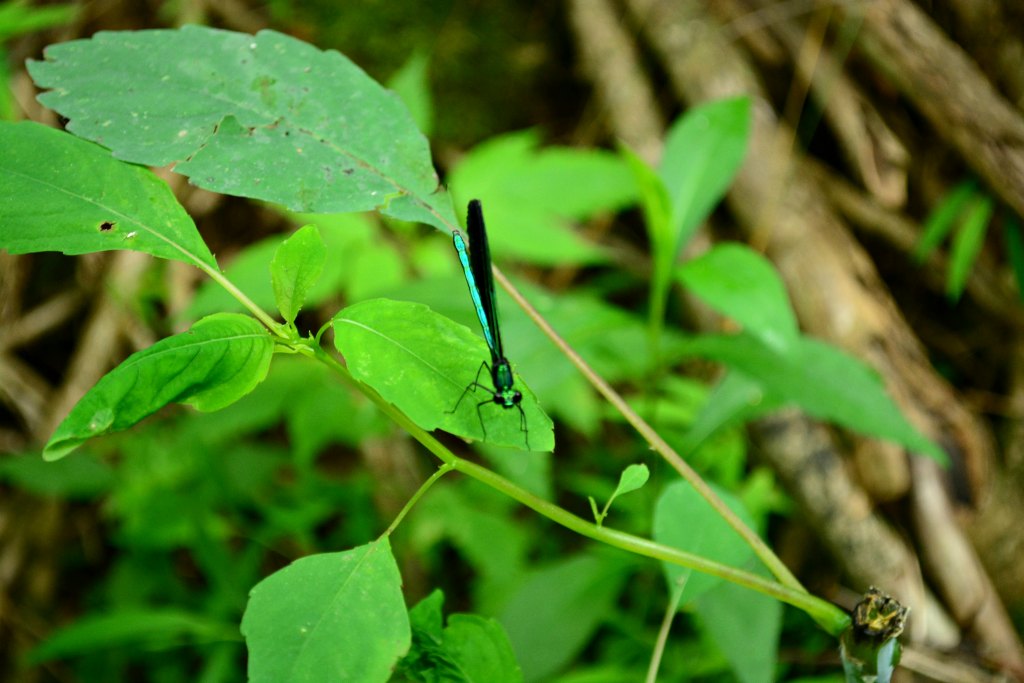 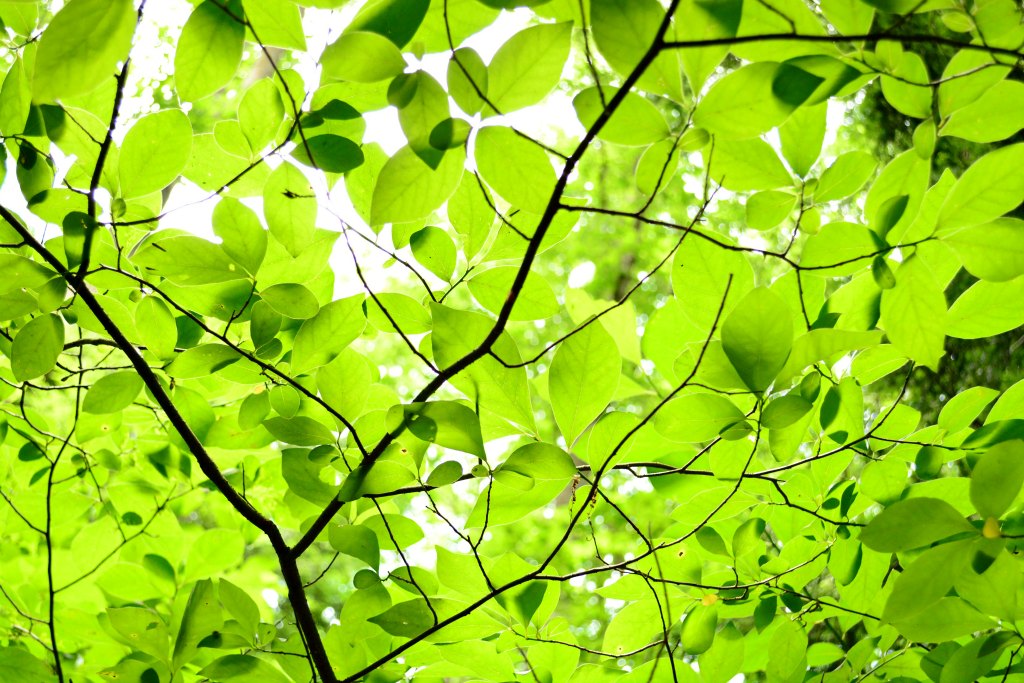 It was a beautiful change to be with nature for a while, breathing in some clean air. There were a lot of people there, families, children and couples, splashing in the water and having a lot of fun! 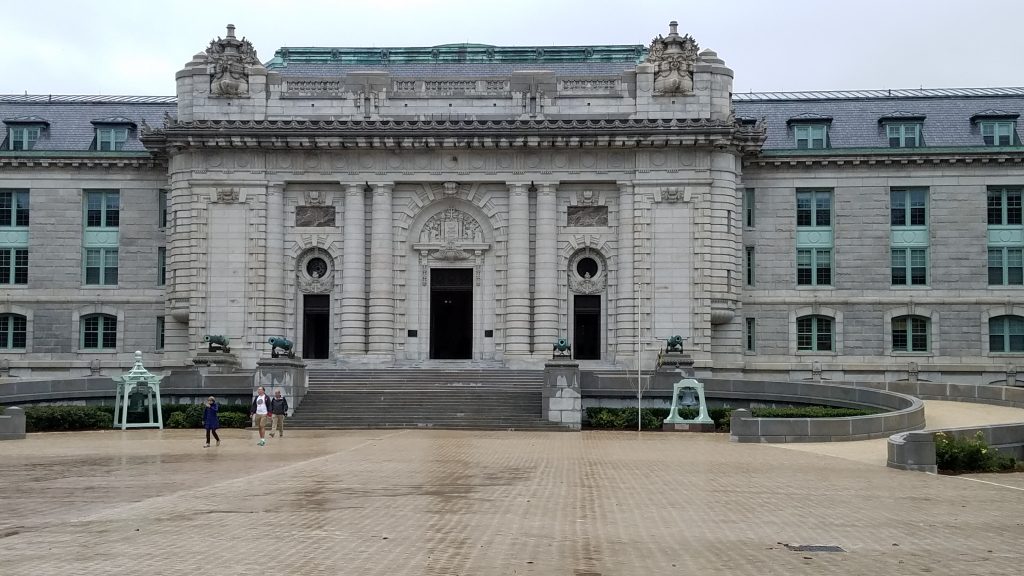 The last day, we visited the US Naval Academy that houses about 4400 students each year. The sheer size of this establishment was breathtaking! We took a guided tour, and were given an insight to the life of the midshipmen here.

The first year students are called Plebes – they are not allowed civilian clothes for theentire duration of the 4-years they spend here. The T-shaped building you see below is the dining hall. Meals are compulsory, and almost ritualistic. You assemble in front of the dining hall along with your company. One by one, companies march into their assigned seating and once everyone’s inside, they seat and have meals family style. From start to finish, 4400 midshipmen are fed and done in 25 minutes!!! 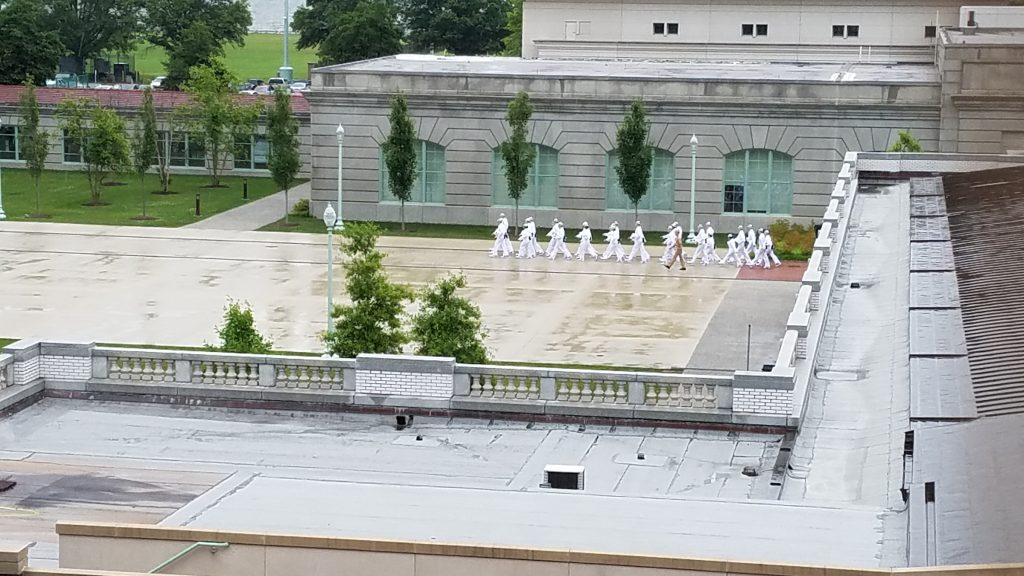 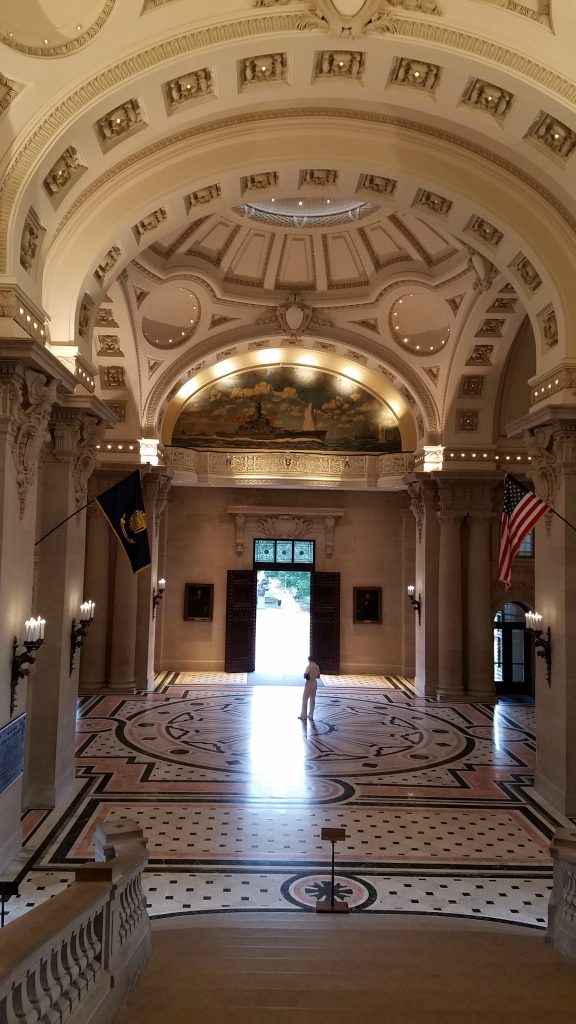 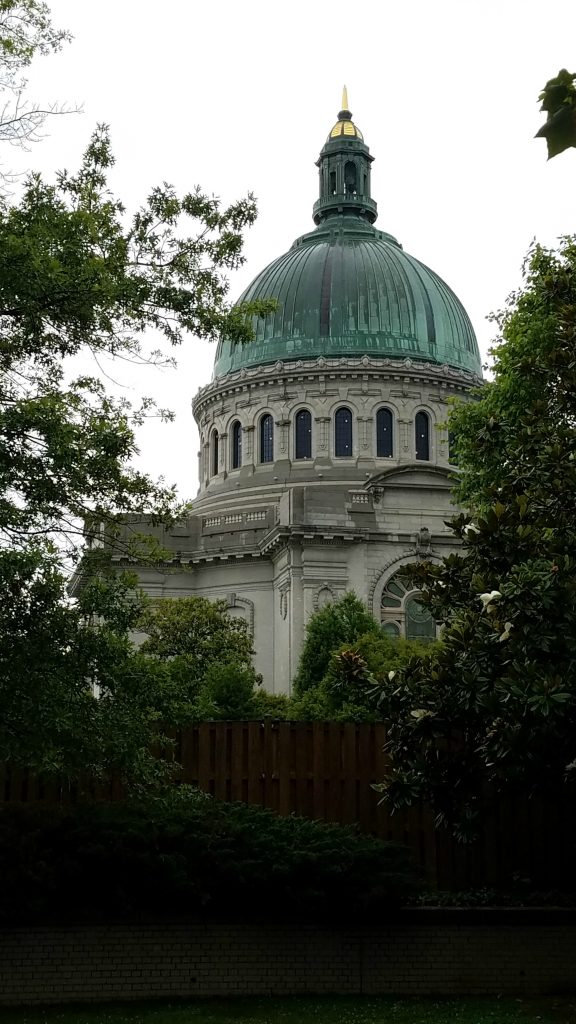 And with that, my 3 day trip to Baltimore, MD came to a close. I am sure there was so much more to see, but we packed in as much as we could in the meager time we had there.