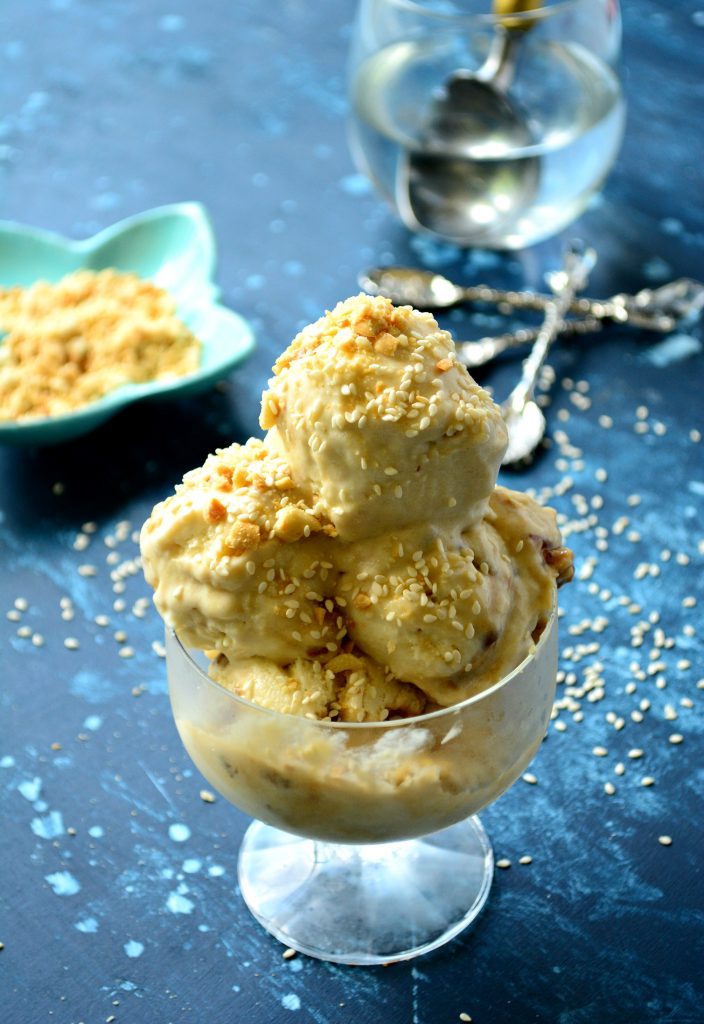 It’s summer, and it demands ice-cream like no other time of the year. While mangoes are in season, it seems to be the most obvious choice of flavour, and chocolate, well, chocolate is unbound by season or time. It is in style all year round, and will be for as long as PMS exists. But why not try something a little different? This Sesame & Jaggery No churn Ice-cream is as different as it gets.

Inspired by Indian flavours – extremely reminiscent of the ancient and timeless Sesame seeds and Jaggery balls that we all grew up eating, except in the form of ice-cream. Ice-cream that tastes like Ellurundai (ellu urundai) – fascinating, isn’t it??? Sesame seeds are one of the healthiest foods in the world. In Tamil, sesame oil is called ‘nallennai‘, meaning ‘good oil’. Sesame reduces levels of cholesterol in blood, improves bone health and lowers risk of colon cancer. Jaggery is unrefined sugar, generally cane sugar. High in iron and fiber, it reduces body heat, is a respiratory cleanser and used in household remedies for common cold, and is a complex sugar and doesn’t increase blood sugar levels as much as regular, refined sugar. 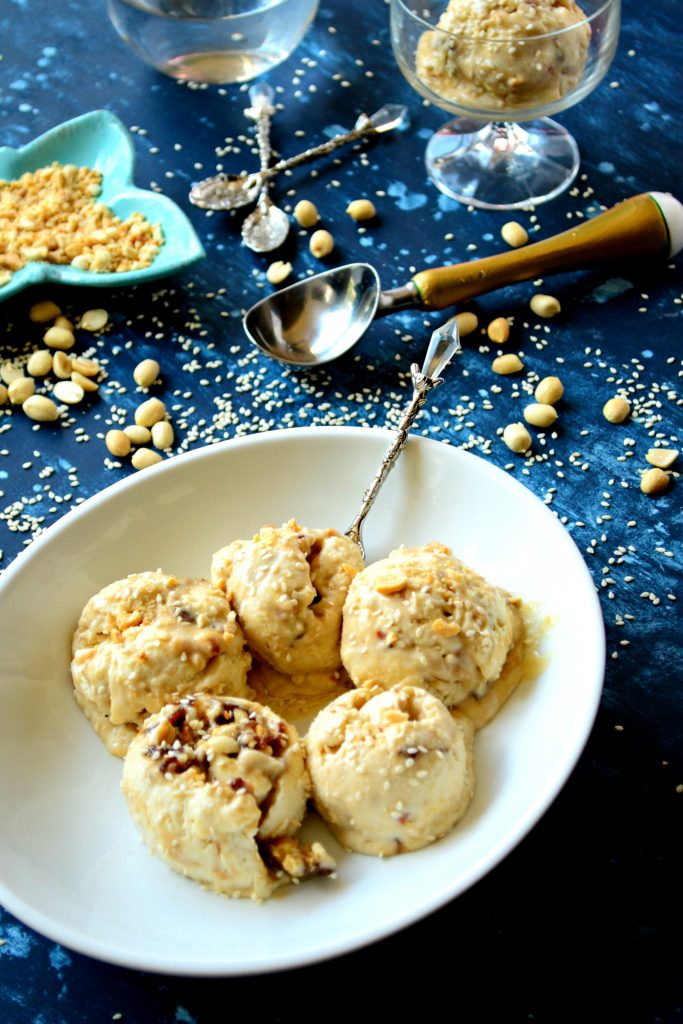 This summer, give something new a chance – a new flavour that might just end up on your favourites list! And all you need are 5 simple ingredients! And no ice-cream maker required!

Begin by roasting sesame seeds and grinding them to a powder. The oil releases with the grind, but don’t worry about that. 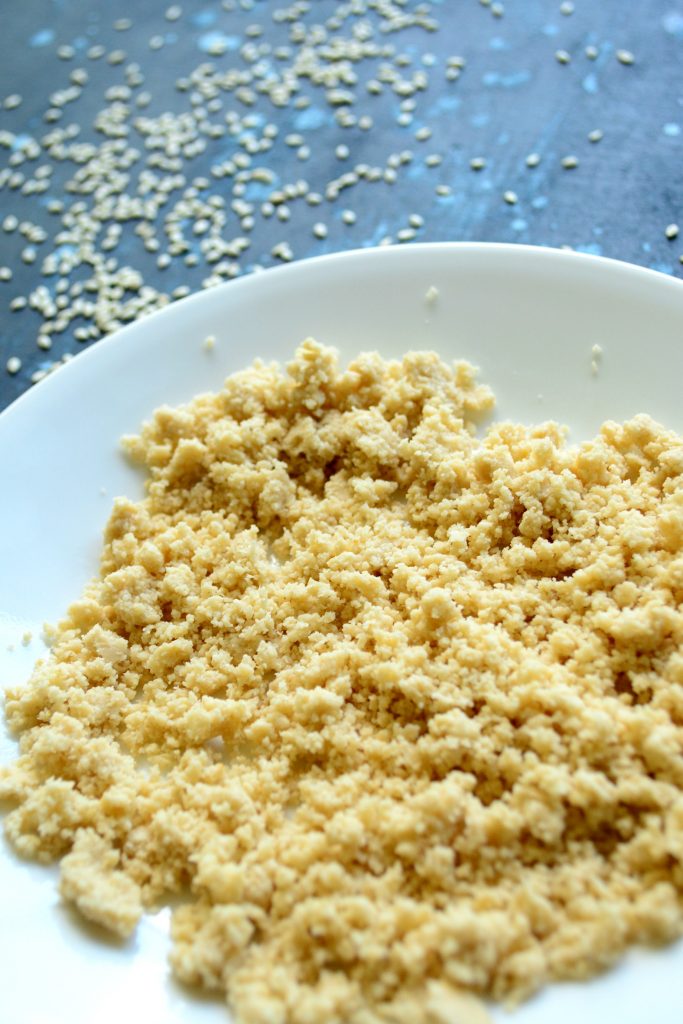 And ice-cream to me, no matter the flavour, is never complete without the crunch of nuts – and traditionally, the sesame & jaggery balls were allowed a handful of peanuts. And I stick to tradition, in a matter of speaking…. These roasted peanuts were crudely crushed in a mortar and pestle. 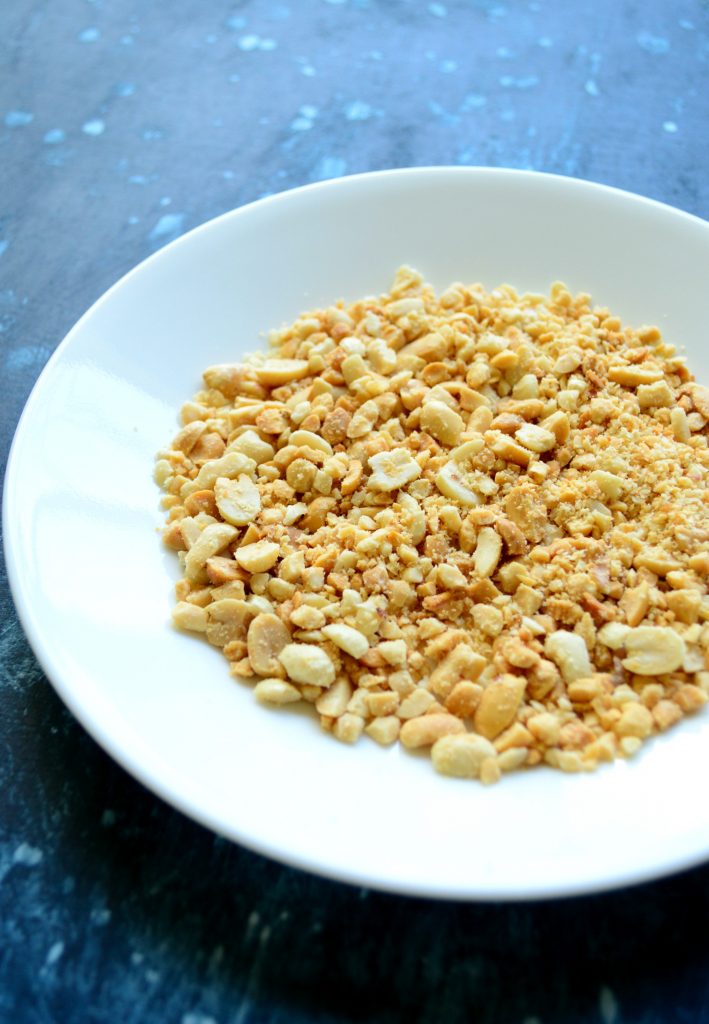 Whisk heavy cream till you see soft peaks. It’s best done when the cream and anything it touches is cold. I put the bowl and whisk into the freezer and use chilled cream. While whipping, I also place the bowl over an ice-bath. Cold is the key to whisking cream.

Once you see soft peaks, fold in the sesame powder, condensed milk and whisk until it thickens considerably, but remains creamy and smooth. 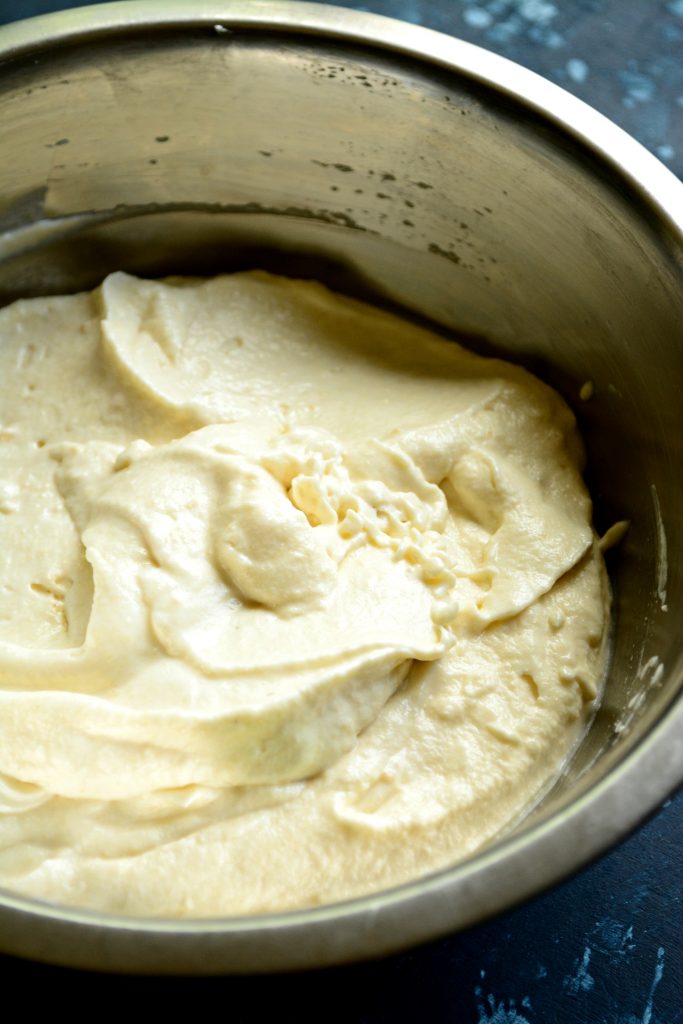 Fold in a handful of peanuts and refrigerate. In the meantime, prepare the jaggery sauce by melting grated jaggery in a little water and bringing to a boil. When you see the whole thing bubbling, remove from heat and cool a little. If its completely cool, the thing will get hard, so lukewarm is good enough. 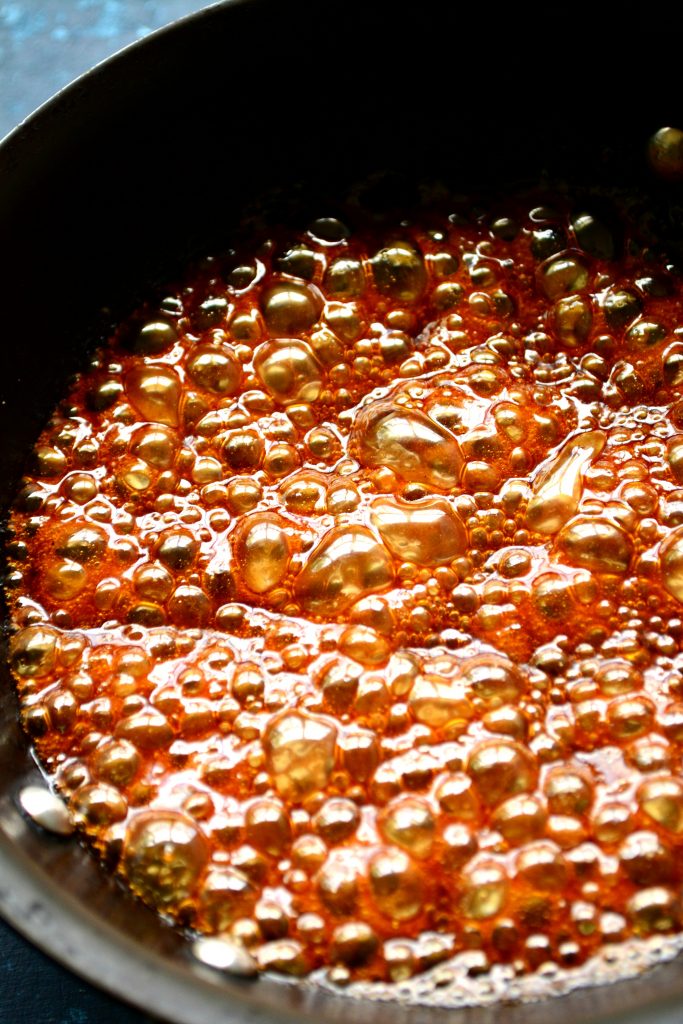 Spoon over half the sesame ice-cream mix into an 8 inch tin and sprinkle some more peanuts. Drizzle half of the warm sauce over the ice-cream mixture and spoon over the remaining ice-cream. More peanuts and the rest of the sauce. 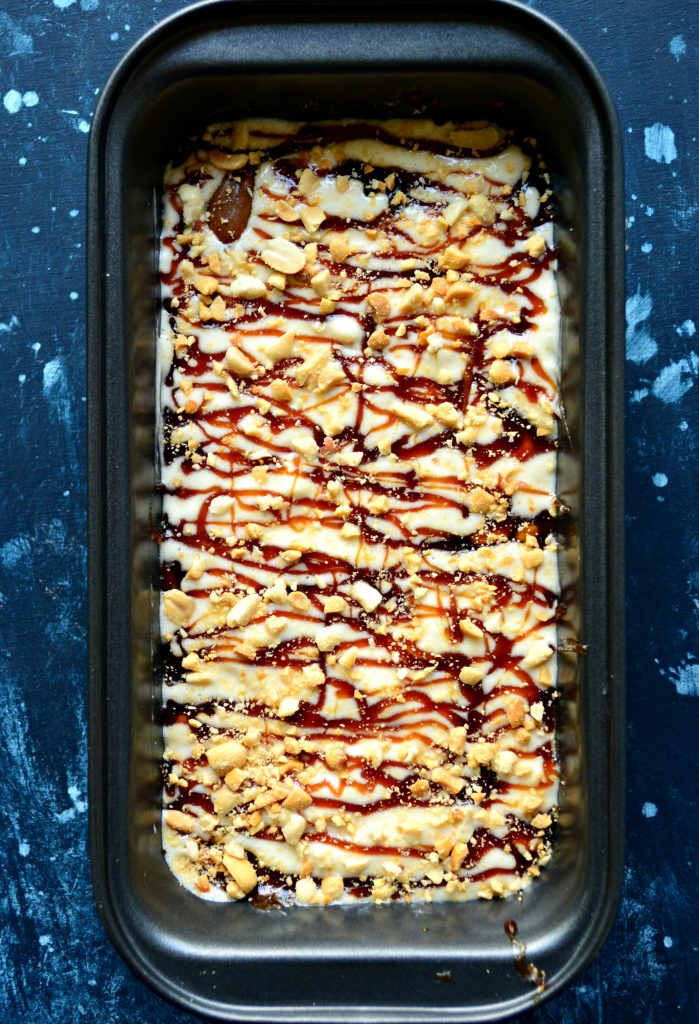 Today  was an exceptionally torturous warm day in the South – I could hardly get a couple of shots before it started melting! So I did the only logical thing I could think of – I ate them all! And it was GOOOOD! 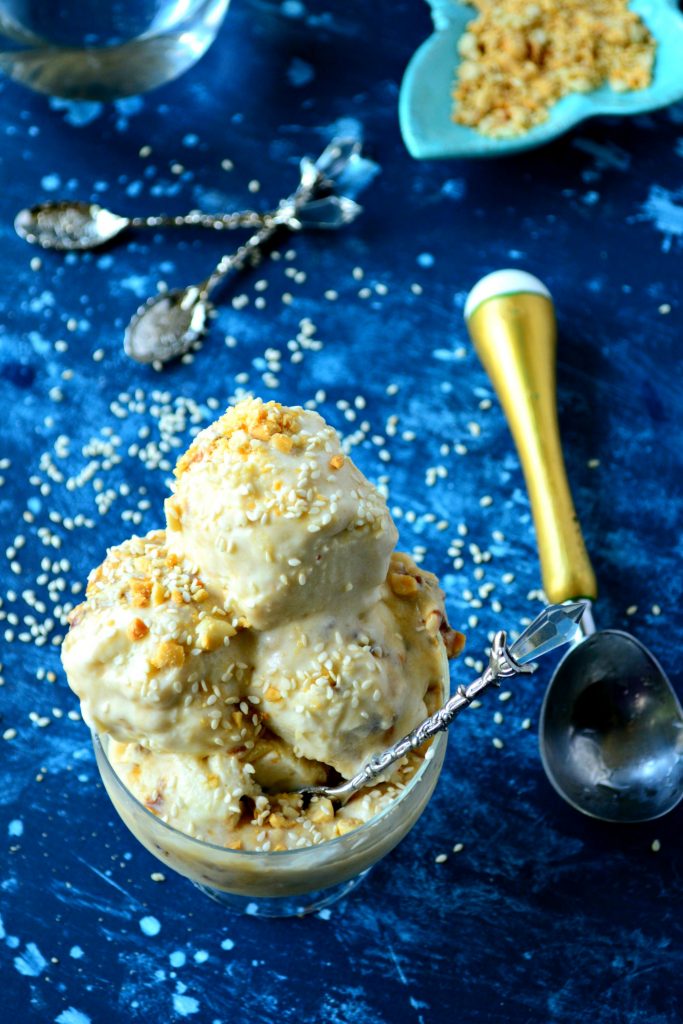 How does it taste?

Exactly like an ellurundai (ellu urundai) – the nutty sesame with a vague hint of bitterness, and the earthy sweetness of the jaggery all packaged into a creamy, cold and delicious ice-cream that takes you no longer than 30 minutes to make (plus the freezing time). And as you take in bite after bite, you’ll get the crunch from the peanuts and scattered bits of jaggery caramel. Mmm hmm!