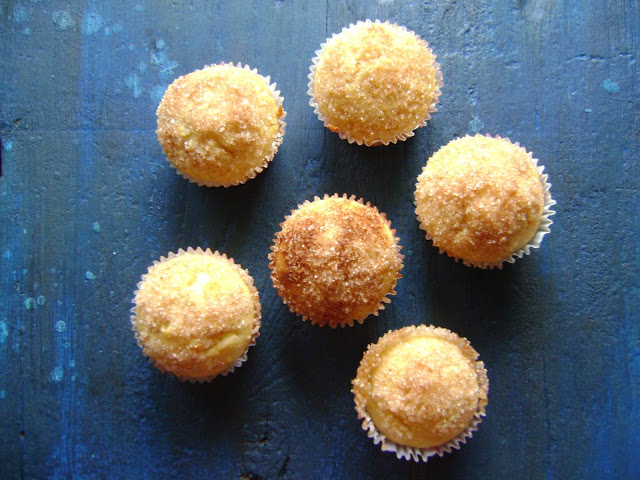 My brother is crazy about donuts, so when I saw this recipe for a donut muffin, I knew I had to make it for him.

This muffin is probably the first sweet thing that got baked in my oven without vanilla in it. But the cinnamon more than made up for that, and my entire house smelled all warm and cinnamon-y all day.

I also tried filling some of the muffins with jam and cream cheese. Although, I feel these filled ones are best eaten straight out of the oven, because the warm jam and cheese just melts out of the muffin into your mouth. It was a delight watching the filled ones bake in the oven. Halfway through the baking process, the cupcake swelled and the jam and cheese started bubbling out through the cracks in the top.

The recipe calls for ground nutmeg, but since I didn’t have that around, I skipped it.

This recipe has been adapted from MyKitchenInTheRockies.

My brother sprayed me with a mouthful of these muffins as he cursed me for ruining his diet. Oh, and he was also holding one muffin in each hand. 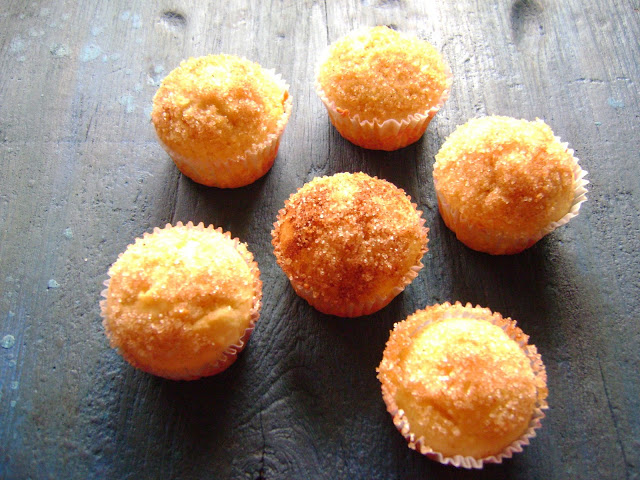 You will be needing:

– Pre-heat the oven to 180°C. Line the muffin tin with paper cups.
– In a bowl, add the sugar, butter and egg. Beat till combined. Stir in the milk.
– Sift in the flour, baking powder, cinnamon and salt.
– Fold the dry ingredients into the wet ingredients. Do not over mix.
– Drop spoonfuls of the batter into the prepared muffin tins.
– If you are going to fill them with jam and cream cheese, fill the paper cup partly with batter, then the filling, and finally spoon over some more batter to cover the filling.
– Bake at 180°C in the preheated oven for 18-22 minutes. Don’t worry, the tops don’t brown for this muffin. It stays a pale yellow.
– In the meantime,  mix the cinnamon and sugar for the coating.
– Brush the hot muffins with melted butter, and roll in the cinnamon sugar.
– Enjoy!