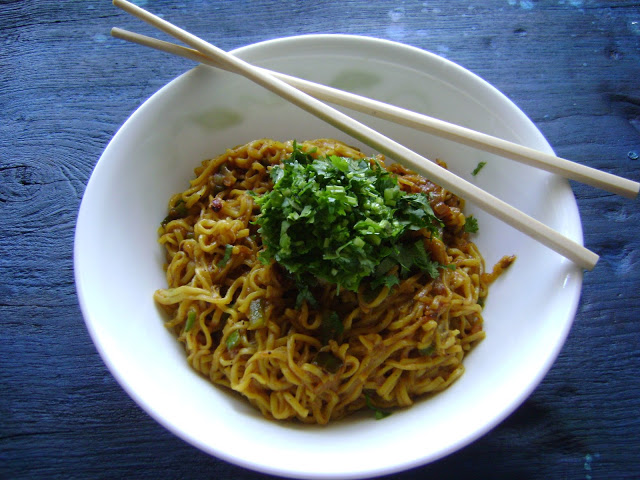 Everyone’s probably had Ramen noodles, either the authentic Japanese version or the instant version which is much more common all over the world. Every country has its own version of flavours, and it provides a quick meal with just water and heat. My version of Instant Ramen made Indian kicks it up a notch!
It’s quite hard to find someone in India who did not grow up eating Maggi. Well, I was an exception. I hated Maggi, Top Ramen and anything that had the words ‘instant’ and ‘noodles’ on the label. Don’t get me wrong, I was a sucker for Indo-Chinese food. Every time I ate at a restaurant, I ordered stir-fried noodles, and rarely changed that order. I just did not fancy the idea of wet soppy noodles in a puddle of flavoured water. As you clearly see, I was a very opinionated child.My first taste of these so called ‘instant noodles’ came when I was 17. I was studying at a friend’s house and she force fed me a bowl of Maggi. Literally. Funnily, I did not hate it as much as I thought I would, but I didn’t try it again of my own volition.

Around the third year of college, I was at another friend’s home and she offered to make instant noodles for me and since I did not hate it the first time, I accepted. And she and her mother made me this version, and I’ve never looked at Ramen the same way again.

It’s very hard to explain how it tastes – it’s neither Chinese nor Indian, but somehow, it’s the best of both. The spices added in the end really make the difference, accompanied by the fresh crunch of the onion, peppers and fresh coriander.

I’ve also added paneer to this (something I learnt from a roommate a few years later) and it’s been a very complete and satisfying meal. I’ve spent weeks eating just this on days when I had to work 16-18 hour days. 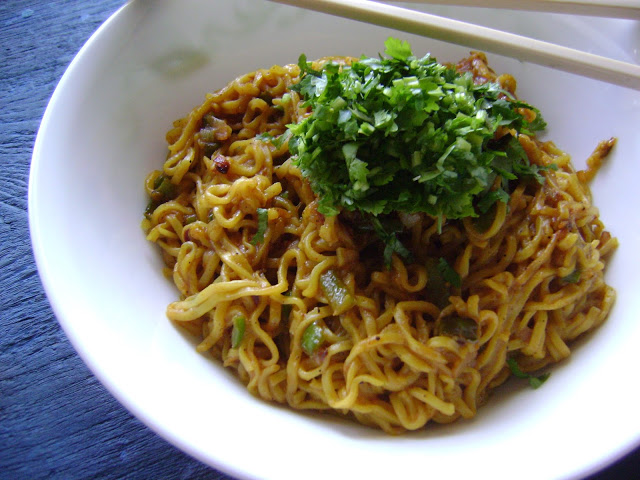