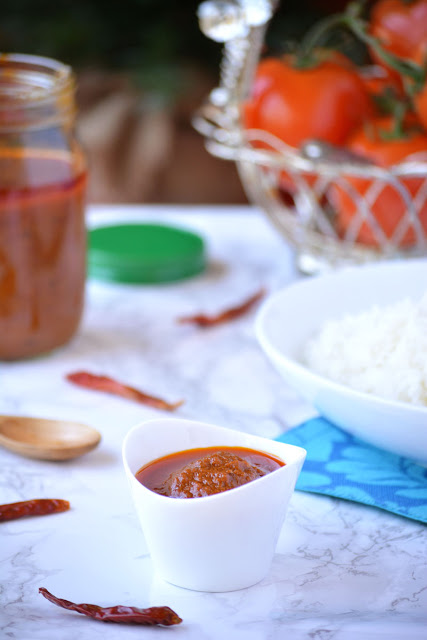 A Thokku is a type of South-Indian pickle, made with grated vegetables, as opposed to regular pickles that are made with bite-sized chunks of vegetables or even meat and seafood.  Unlike the pickling process in the West which uses brine solution as the pickling medium, Indian pickles are made with salt, Antimicrobial herbs & spices and oil.  Abundant sunlight sterilises the pickle naturally, preserving it for years.

Pickling is traditionally a summer activity. Indian summers can be harsh, and looking forward to summer fruits, pickles and vadams makes it bearable. When the sun comes out, the women bring out the pickle jars or what we call ‘oorukai jaadi‘. Ceramic, narrow necked and generally with a loosely fitted lid, these jars would be left to ferment and proof for several weeks in the sun. No South Indian meal is complete without a small touch of pickle. In fact, while serving a traditional banana leaf meal, pickle and salt are the first to be served.

Pickles were never my cup of tea, but I made an exception for the Tomato thokku. It was one of my favourite things to eat with rice as I was growing up, and it still is. My mother would make a large batch of these when tomato prices were down and refrigerate them, and I would devour it, as if it were the main course itself. Chillis are my weakness, and I am a sucker for spicy foods. It goes great with rice, rotis, even toasted bread. I wonder how it would fare as pizza sauce…. Must try that sometime.

Oh, and this one doesn’t need any sunlight activity to be palatable. The stove is all it needs.So if you are living in parts of the world where sunlight is a luxury, then this one’s for you. 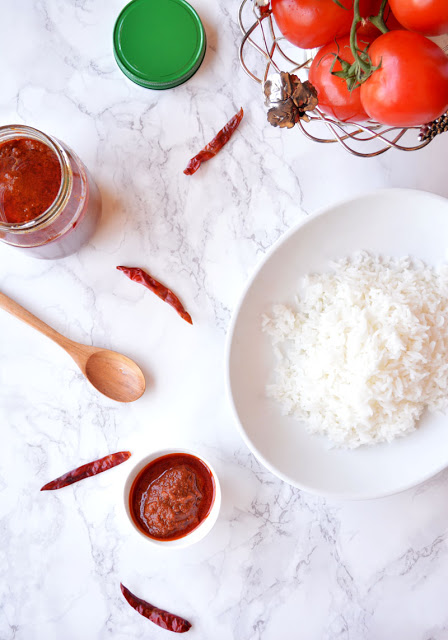 Although this is pretty easy to make – with literally almost no effort on your part, be warned: there will be clean-up.  While the tomatoes cook in oil, it splatters a lot, which is just a natural reaction to the water molecules in the tomato reacting with the hot oil, but  it does tend to leave your stove and the floor beneath it stained in red oil. So before pouring the tomatoes into the oil, just spread some paper towels or newspapers around the stove carefully, making sure the paper does not  burn accidentally, because from what I hear, cleaning up a burnt-down house is much, much harder.

And while cooking, cover the pan loosely with a lid, to catch the oil splatters, but leave enough room for the steam to escape. There should be no condensation forming within the thokku as it cooks. Water messes with the preservation process.

It may seem like a lot of oil, but like any pickle, the oil is needed to preserve the thokku. So despite the temptation, try not to drain off the excess oil. Let it pool over the top of the pickle at all times. This will form a barrier against water condensation, preserving the thokku for a long time.

Once cooled, transfer the thokku into a sterile, dry glass container with a tight lid, and refrigerate for up to 3 months. You may freeze it for longer, but I’m not sure the flavours and texture will be the same when defrosted.

Asafoetida (hing / perungayam) is an essential ingredient in this recipe, and in any recipe that calls for it. Those of you who have not heard of it, asafoetida is a latex resin gum that is derived from the Ferula plant. Although it has a nasty smell in its raw state, when cooked, it imparts a very pleasant flavour and fragrance to food. But what’s more important than its taste and smell are its health benefits. It is an antiflatulent agent, and must be used when cooking lentils and vegetables that tend to be naturally gassy. Other antiflatulent agents are turmeric, ginger, garlic, cloves, cinnamon and black pepper. Conversely- cumin, aniseed, cardamom and ajwain cause flatulence, and if you notice, you’ll see that Indian cooking consists of at least one from each group in every dish, balancing out the effects.

Indian food is generally considered harsh on stomachs, but that’s largely because these little details  may have been missed from being correctly used. When cooked properly, Indian cuisine is one of the most healthiest and
delicious in the world. It is rich in flavour, texture, tradition and techniques with  each region reflecting its diversity in the form of the foods
native to it.  Southern India is closer to the Equator while the North is crowned by the grand Himalayas. There is an obvious gradience in temperature as you move across the country, and the food reflects that – Southern cuisine is hotter and spicier than the Northern fare, which is creamy, buttery and more mellowed. This is because spices like chillies and peppers raise the internal body temperature and facilitates perspiration, helping cool the body to adapt to the southern heat.

So the next time you complain that Indian food is too spicy, remember, it was designed that way, and for good reason!

Previous Post: « Thai Tofu Salad with a Spicy Peanut and coconut curry Dressing
Next Post: Microgreens – 5 times the goodness of a full-grown plant »