If you don’t own a cast iron pan, or have one but it’s rusted and buried in your cupboard, you need to read this.

Our grandmothers swore by it and treasured them like priceless jewels in a treasure chest. Our mothers, tired of all the attention a cast iron pan demands, gave up and moved on to the easier and more hip non-stick pans. We, are now the generation that has to live with the hazards that ‘easy‘ and ‘hip‘ has cost us. If you thought cigarettes were the one ‘cool’ thing of the past that was better-off never having been invented, think again.

Non-stick pans are lined with polytetrafluoroethylene (PTFE) commonly known as Teflon. When heated above 500°F, the coating breaks down, releasing harmful fumes that when inhaled can cause what’s known as a polymer fume fever in humans (a temporary flu like disease resulting in chills, fever and headache) and almost instant death in birds. So if you have a little-widdle tweety bird or a talking parrot at home, your non-stick is probably killing them.

Over 650°F, six toxic gases are emitted from non-stick coating, two of which are carcinogenic. Now can you swear, that you have never left an empty non-stick pan heating while you prepped the ingredients or rolled your rotis? I know I can’t. Cancer kills more more people each day than global warming does. And your non-stick cookware is probably contributing to both.

After loosing a parent and countless friends and family to cancer, I am changing my life, a little bit each day. And I started by retiring most of my non-stick pans. Now, non-sticks are strictly restricted to once-in-a-while usage, mostly for frying eggs and tofu (which is a quick job and does not need too much heat).

Update (Jun 25th, 2017): I no longer use any Teflon coated pans. The only non-stick pans I use are diamond-coated. All other pans are cast iron! 🙂

The Journal of the American Dietetic Association tested 20 different foods cooked in cast iron and other metal pans. They found that food cooked in cast iron had a much higher iron content than when cooked in other types of metal containers. For example, a raw egg has about 1.49 mg of iron but after scrambling it in a cast iron skillet, that number jumped to 4.76 mg. (source)

…that your Cast Iron can last several lifetimes?

Have you owned a non-stick pan for more than 3 years? I doubt it. Once the warranty period expires, so does the non-stick coating. While I have seen a lot of people (I plead guilty here!) continue to use their non-stick pans even after the coating wears off around the edges and here and there in scratches, this practice is deeply frowned upon. The coating, when ingested, does not get digested, and stays in your stomach and gut for decades.

Unlike the run-of-the-mill non-stick pans that come with a limited warranty, these babies are really, really tough! You can use a metal spatula, a knife, a ninja sword or a light-sabre…Ok, maybe not a light-sabre, they cut through anything! But hell yeah, they’ll last! It truly is a one-time investment, unlike a non-stick pan which you have to re-purchase every couple of years as the coating wears off.

…that your Cast Iron is actually non-stick?

Cast Iron gets a lot of bad rap with non-stick users, because they think it uses more oil. WRONG! When ‘seasoned’ properly, cast irons are also non-stick, and can be used for oil-free cooking sans the hazards that a non-stick coating provides.

Seasoning is largely a self-healing process which occurs through regular cooking and provides a natural sheen to the cast iron, the oils in the food forming layer after layer of ‘non-stick coating’. Which means, the more you use your cast iron, the more non-stick it gets.

This 4-egg Indian Spiced Frittata was cooked using just a little over a teaspoon of butter. And that was only because I wanted the vegetables to slightly roast, without the smokiness that oil-free cooking can create. 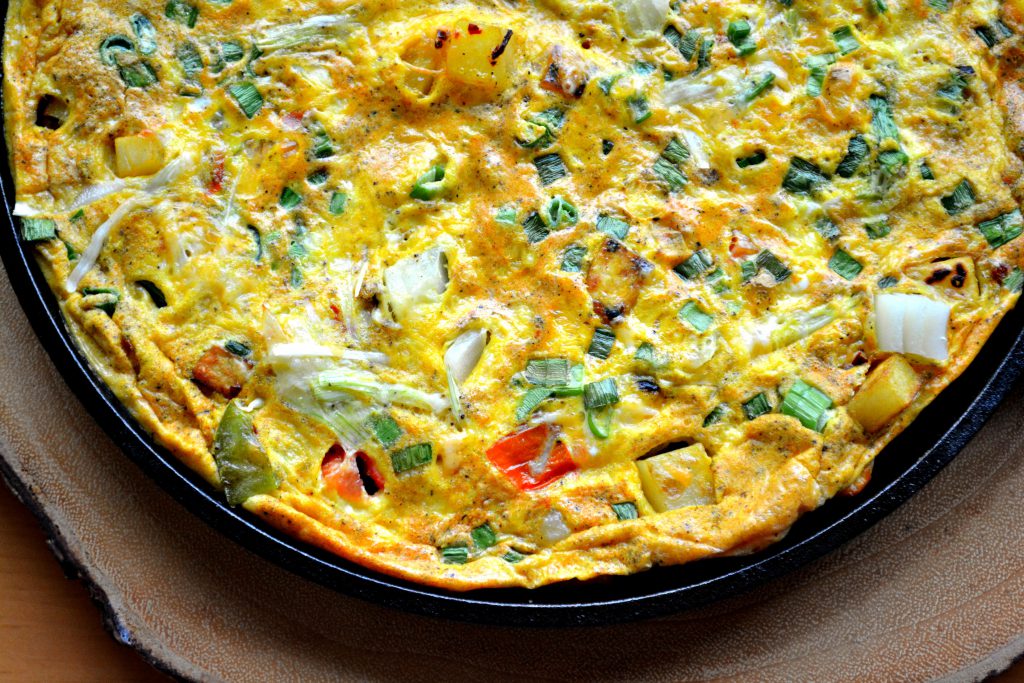 Take care of your non-stick and make it last forever!

Unlike what you think, taking care of a cast iron isn’t much work, if you know what you are doing.

1. Cook on your cast iron as usual. Use oil, don’t use oil – your call!
2. Simply wipe the cast iron with a clean cloth, or paper towel while still warm (the oils are loose when warm).
3. Let cool, and store.

Cast Irons were not intended for washing, as iron and water don’t make good friends.

But if you cooked meat or other greasy things and it feels like blasphemy to not wash it, go ahead!

1. Use a sponge and a little soap to wash your cast iron of any grease. Don’t use a scrubber, and definitely not a steel scrub!
2. You can soak stubborn dried food off your cast iron. A faster and my favourite method, is to boil water in the burnt pan, and the food just lifts right out! This method works on almost all kinds of pans.
3. After washing, wipe down with a cloth immediately. Do not leave it on the drying rack like you do other utensils. Water + Iron = Enemies.
4. Now you have to replenish the oils lost by washing with soap. Put a few drops of oil in the dry pan, and wipe down with a paper towel. Wipe down all over (front, back and handles).
5. Store as usual.

If you’ve been neglecting your cast iron by doing all the things I just said you shouldn’t do, but now you’ve come with a repenting heart back to your cast iron, fret not!

Here’s how you can restore your cast iron back to its former glory – something you can’t do with non-sticks.

1. If you see rust on your cast iron, wash it well with soap and water. Use a steel scrub if you must (I know, desperate times call for desperate measures!)
2. Wipe your cast iron pan dry immediately.
3. Generously lather a teaspoon of vegetable oil with a high smoking point like canola, sunflower, peanut, etc.
4. Wipe down excess oil with a paper towel. You don’t want it to feel slimy and slick with oil. Make sure you coat the handles and the back as well with oil, and wipe down excess.
5. Place it upside down on the middle rack of your oven. Lay parchment paper or foil in the bottom rack to catch oil drips. Placing it upside down makes sure the extra oil can drip off, and not get caked with patches of oil as it bakes.
6. Bake in a 350°F – 400°F (180°C – 204°C) oven for about an hour.
7. After an hour, turn off the oven, and let cool inside the oven for 5-6 hours or overnight.
8. Enjoy oil-free pancakes/toast/omelettes/frittatas in the morning in your newly seasoned cast iron pan!

I am not saying that you should march the streets and burn all your non-sticks in a public protest tomorrow. Actually, never do that, because burning a non-stick pan is just going to release all those toxins into the air.

When a product first enters the market or into our homes, we take care to use it as per the manufacturer’s instructions. But I think that we have started to take non-sticks for granted, abusing them to a point where the hazards they are capable of causing outweigh their usefulness.

Change for the sake of change never lasts long. So make this change gradual. Start with one cast iron pan. Learn how to use it, and slowly, you’ll find yourself using your non-stick less and less.

Our grandmothers may have been a little wrong here and there, but they were right about the cast iron. The next time you are in Ratna Stores or in other specialty home goods stores and turn your nose up while walking past the rusty, gross looking ‘irumbu kadai’ cast iron section, think again!

If you are outside India like me and want to buy cast iron, try it here on Amazon. Lodge products come pre-seasoned. So you can start your non-stick journey immediately! Ordering online saves you the trouble of lugging it back from the store, as these babies can be quite heavy. It gets delivered to your doorstep!

And don’t forget to comment here and let me know if you do make the change, I’d love to hear your cast-iron stories!

** This is NOT a sponsored post. I truly, truly believe and love this product, otherwise I wouldn’t dream of suggesting it to you. **
** This post contains affiliate links. You’d be doing me a huge favour by using this link to buy any of their countless amazing products! **