While the Japanese don’t really make Ramen at home (they eat out at their local Ramen restaurants), those of us without that option can now make a bowl of authentic Vegan Spicy Ramen Noodles wherever we are. 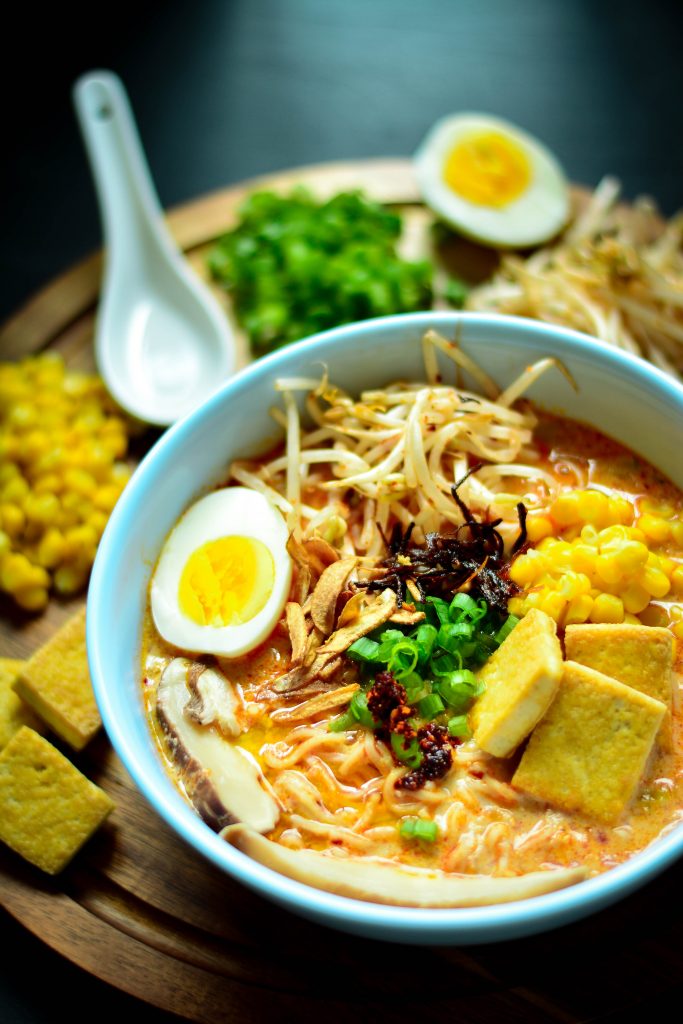 The name ‘Ramen‘ has grown to becomes synonymous with the instant noodles that only need you to boil water to get a quick meal on the table. But authentic Ramen, which is a popular eat-out food in Japan, is made from scratch and is more sumptuous and nutritious than its internationally marketed instant kind.

If the only Ramen you’ve ever had has come with a flavour packet, then you’re in for a treat, my friend! I recently had a taste of authentic Ramen at the Jinya Ramen Express in LA and I’ve been hooked ever since. It’s now on top of my list of comfort foods, particularly on a cold day!

So naturally, when I came home and began craving it, I had to make myself a bowl – and make myself (and my husband) a bowl, I did! And you know what? With the right ingredients, it’s surprisingly easy and quick!

Umami is one of the 5 basic tastes in the Japanese culture, along with sweetness, sourness, bitterness, and saltiness. It’s usually described as ‘meatiness’ – because it’s a flavour usually found in fish and meat. While it’s the crux of a good Ramen broth, the same Umami flavour can be introduced into a Vegan broth, thanks to certain unique plant ingredients. Seaweed, mushroom and miso paste here does the job of bringing intense Umami-ness to a meatless-fishless broth!

Let’s start by looking at the ingredients (you don’t normally stock): 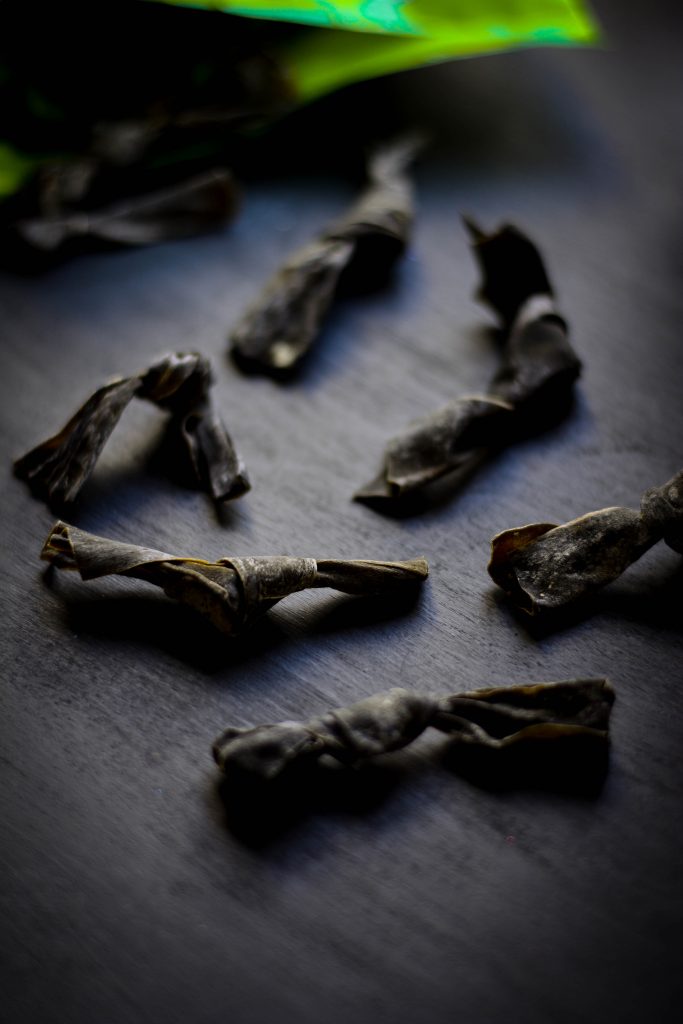 Find these at your local Asian supermarket in ‘knots’ or strips – absolutely unappetizing to look at, the only description I can think of is greenish-black version of an Egyptian Mummy’s wrapping. It really looks like death, but the umami flavour is brings to the table is quite unique, so please try to find it. 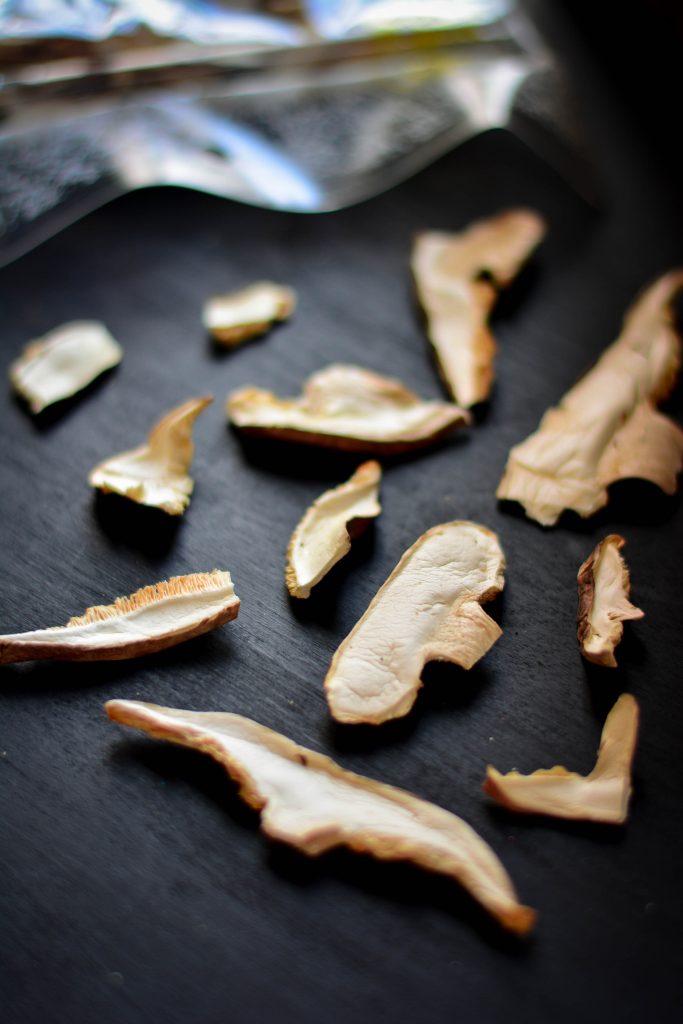 Another contributor to the umami flavour. Not as hard to find, you should find them in grocery stores near you. If you can’t find dried ones, substitute with fresh ones. 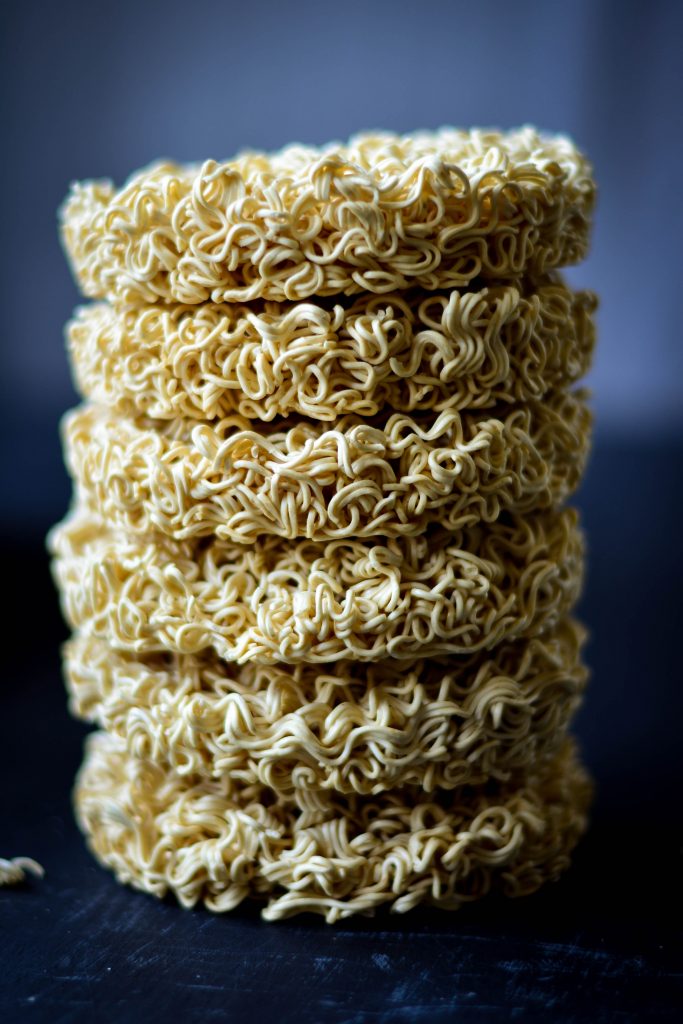 I found aisles and aisles of just dry noodles (there are like a billion different varieties, people!) in my local Asian store. The problem is that most of the labels are in Chinese/Japanese, with very little English. So first, read through the ingredient list (that should normally be in English) – we’re looking for wheat flour, water and salt. Nothing else! There are flavoured ones too, spinach, carrot, pumpkin and what not, but trust your taste buds to find what you love. Then find the right size and you’re good to go. Else substitute with angel hair pasta. 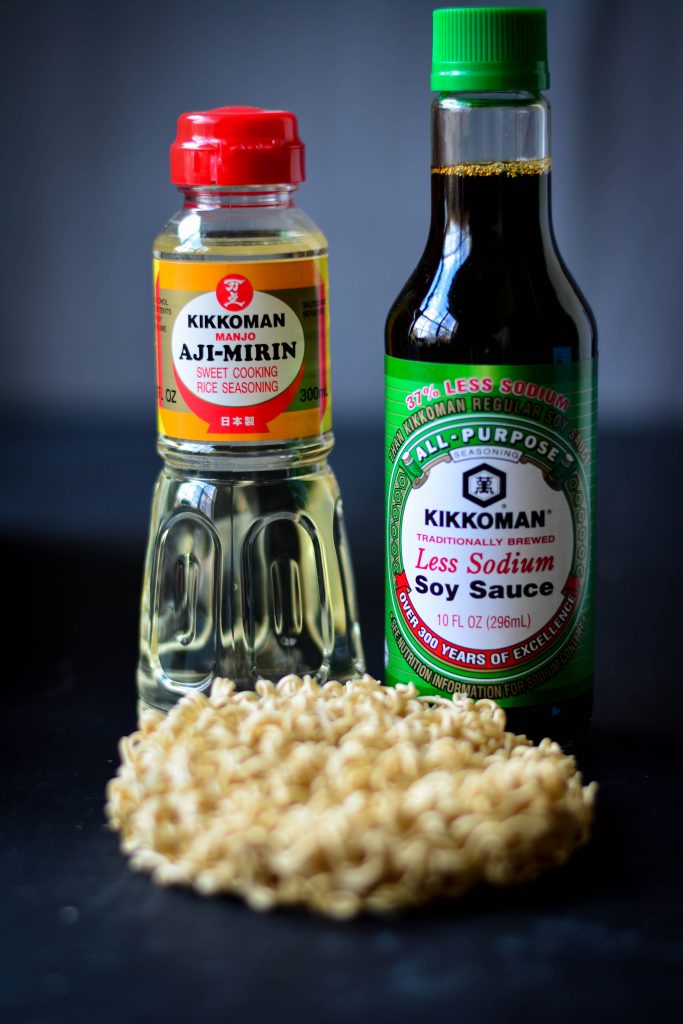 A sweet rice wine commonly used in Japanese cuisine. Substitute with Sake, if you have some lying around. 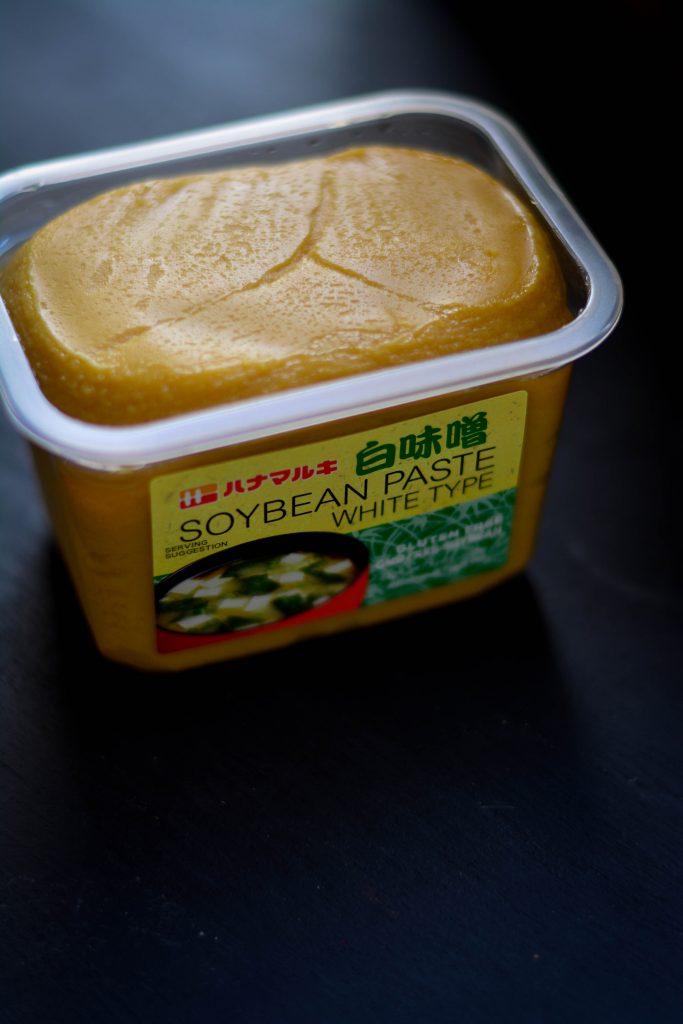 The biggest contributor of the classic ‘umami‘ flavour in this dish. Find this at your local Asian supermarket. Most miso comes with bonito (fish flakes), so check ingredient list (then, check again!) to make sure there’s nothing in there you can’t eat.

While traditional Dashi involves some element of fish in it, for our vegan version, we’ll be invoking the Umami flavour through Kombu (kelp) and dried Shiitake Mushrooms. Soak in water for half hour and bring to a simmer (do not boil!). Strain and reserve the liquid. This is your basic Vegan Dashi Stock – the base of oh-so-many things!

Smells like death (not kidding!), but makes up with the umami flavour! 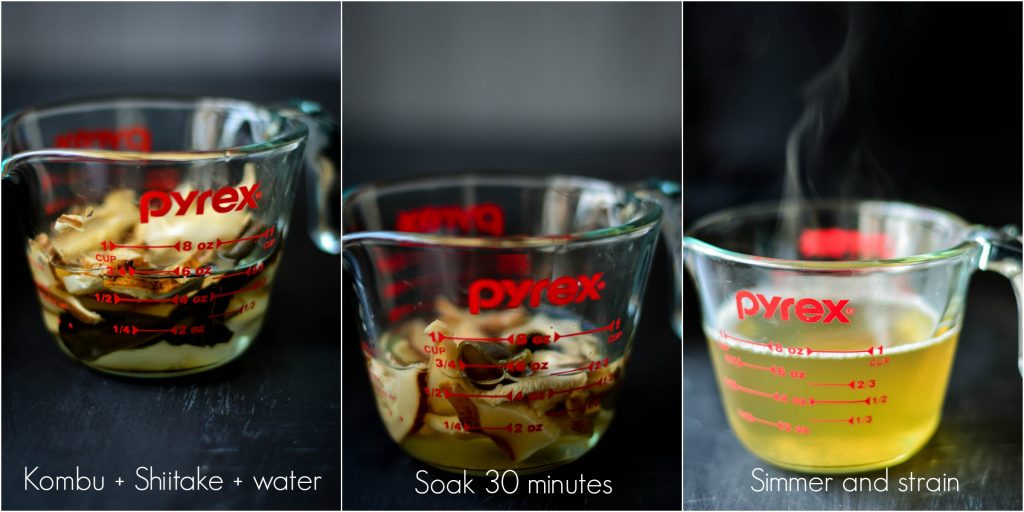 The Japanese say that a good Ramen is judged not by the noodles, but by the broth. There are so many kinds of Ramen broth – a clear soy base, tonkatsu (creamy pork broth), miso broth (fairly new to the Ramen culture) and more.

The Vegan broth we’ll be creating closely resembles the tonkatsu broth – no pork, but all the milky creaminess, thanks to soy milk. If you’re not too particular about being Vegan, substitute with regular milk instead.

Once the broth is ready, boil the noodles according to package instructions. Drain and place a serving in a large bowl, and pour hot broth generously over the cooked noodles. Garnish with the plethora of options and enjoy a steaming hot bowl of authentic Japanese Ramen – made spicy and Vegan, just for you! 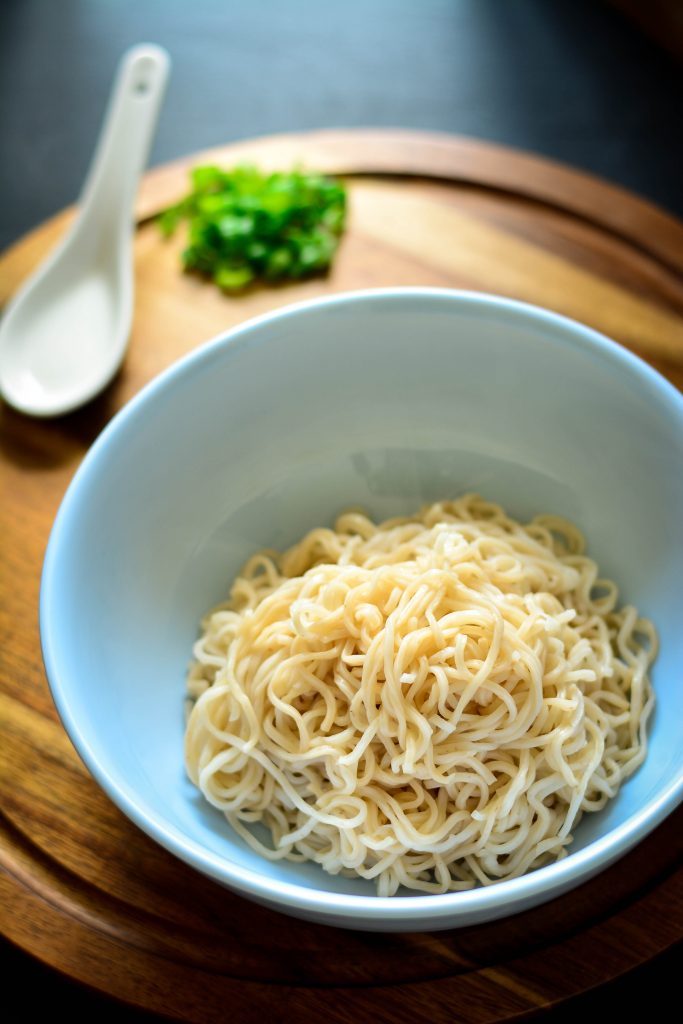 While you can pick from the list of garnishes given below, try not to skip the bean sprouts, corn, fried garlic and chilli oil. The garlic in particular compliments the umami flavour quite well!

For the Dashi Stock

FOR THE RAMEN SOUP BASE

Source: Adapted from Just One Cookbook