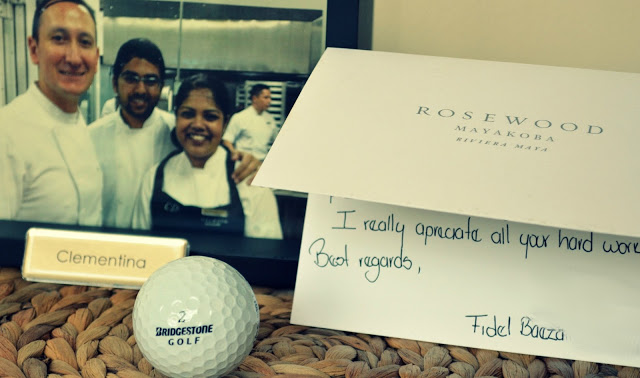 Have you ever gone through a moment, where you know something amazing is happening, but your mind refuses to acknowledge and comprehend it? Well, for me, that moment lasted for about 2 hours – plus the ongoing déjà vu that hits every time I look at pictures and souvenirs at home.

I had the best, best 5 days of my life at the Rosewood Mayakoba in Nov 2014. I will never let myself forget even a minute, nay, a second of my time there. Especially the part where I spent two hours with one of the top pastry chef’s in the world!

Why am I writing about it so late? Because to me, writing about it makes it real. And it’s taken me this long to believe it to be true. Besides, writing a story gives it an ending of sorts, and this is a haze I never wish to wake from.

It was about a week after my wedding, that I found myself in Cancún, Mexico with my new husband. The word ‘new’ only applies to the title ‘husband’, as we’ve been friends (and then more-than-friends) for about 10 years. Our courtship was a long one, and included about 5 years long-distance. And it is he that I should thank for this trip, and for the lovely, unforgettable surprises he had planned for me, along with the help of Rosewood’s fabulous staff.

Our second day there, and after breakfast, my husband suggested that we spend a day at the spa. Which was utterly unbelievable because he hates them, but was true love that unconditional?. I still went along anyway, but was taken to the in-house Casa Del Lago restaurant instead.  So there I was, outside a restaurant that had just closed breakfast service and was setting up for lunch. We were then met by two staff managers bearing white jackets. Now a comprehending mind would have put two and two together. But I was still looking forward to a spa day. So I thought that maybe this was Mexican spa clothing and put them on. It had the name of the resort embroidered on it, and my clueless face propped out of the neckline. 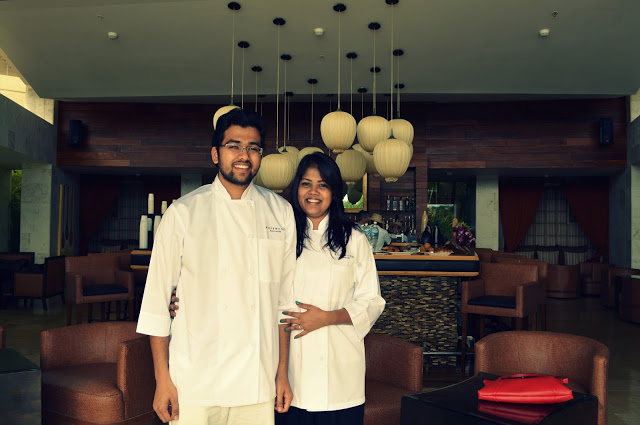 I was guided into the Casa del Lago kitchens with no explanations either from the staff or from my husband. At this point I concluded that it was no longer a spa day and settled on what maybe a kitchen tour. They all had knowing smiles plastered on their faces, and I was smiling too, but why wouldn’t I be? I was standing in a Star kitchen, for my very own private tour!

And that’s when Daniel Scott, Managing Director of Rosewood Mayakoba breezed past us, then doubled back for a moment to tell me that a lot of people laboured to make this event possible and that I should make sure to to enjoy it completely! If I thought I had any clue as to what the day was unfolding into, well, psssht! No more! I was back to being clueless again. How would Daniel Scott know who I was? Why should he, I was just another guest for a mealy 5 days! 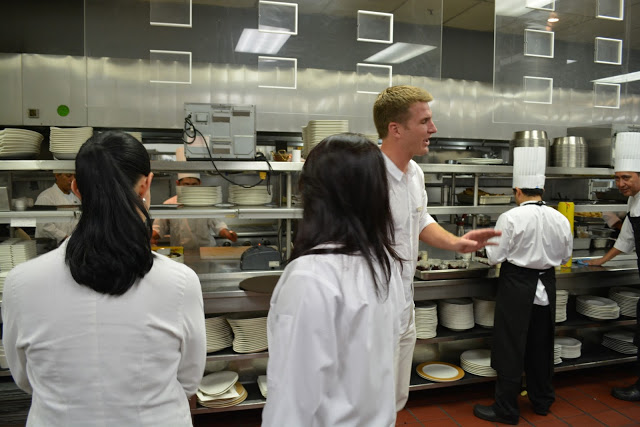 With these questions racing through my mind, I was promptly marched into a small room, with 3-4 people working in white jackets just like mine (rather the other way around, I think) and introduced to Pastry Chef Fidel Baeza. If you were anything like me, meeting a Chef is like meeting a movie star (think Tony Stark or Captain Jack Sparrow). At the time, I did not know anything about Chef Fidel, but a quick Google search when I got back to my suite informed me that I had just spent two hours with someone listed under Top 25 World Chocolate Masters, who was a Barry-Calleabut Chocolate Ambassador and simply one of the best Pastry Chefs in the world!

Chef Fidel, then filled me in on what I was to expect today. I was to ‘help’ the pastry team prepare one of the desserts that was to be served at the PGA World Tour Opening Ceremony that night. There were screams and loud disorienting noises inside my head. See my face in this picture? That was me receiving the news rather well, don’t you think? 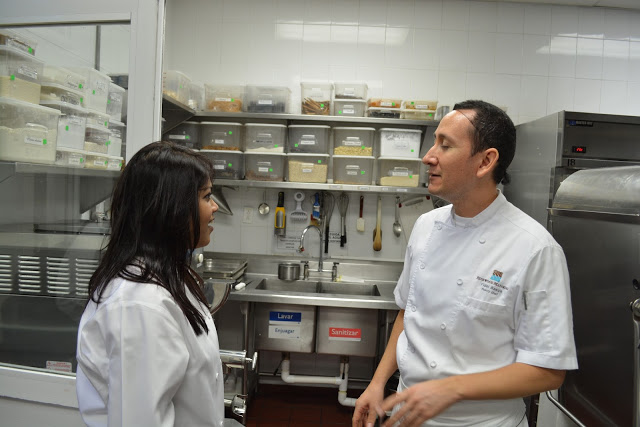 I knew Mayakoba was hosting the PGA Tour during our stay, but being completely daft about all things in the world of sports, it did not interest me much. But lending a hand to the dessert table spread at the opening ceremony – now that left my insides tumbling and my head was getting lighter by the second.

I looked around at my escort group (including my conspiring husband) and there they were, smiling and cheering. After quick hugs, they left me with the Chef in his work station. My husband remained outside the room, taking pictures to prove to me later that this really happened.

I was given my own apron (with my beautifully embroidered initials) and a name tag! I was officially ‘staffed’. 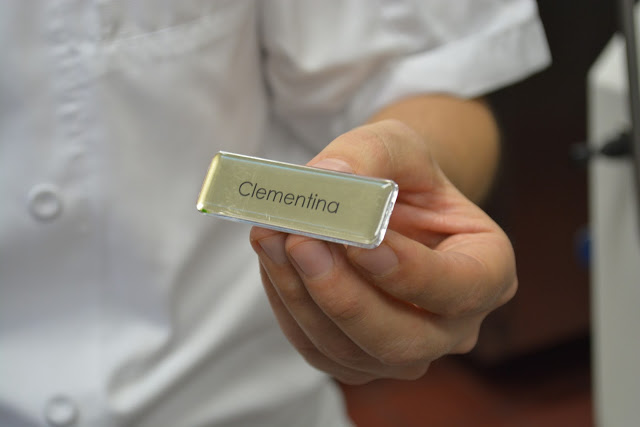 After a thorough washing of the hands up to my elbow, and donning the ominous hair net, I was off. Chef Fidel first began by showing me a chocolate sculpture he had made for each of the PGA players staying at Rosewood. This sculpture would be waiting in their suites when they arrived that day. It was a green clover leaf (for luck, obviously) balanced beautifully and precariously on rocks and a pretty bronze shell. The rocks were covered in ‘nutty’ moss and everything was instantly glued together with molten chocolate and a blast of cold air. I was then allowed to try my hand at peeling off the green chocolate-print laminates on the clover leaf. I felt like I was 8 again, and in my mother’s kitchen, simpering with childish glee! 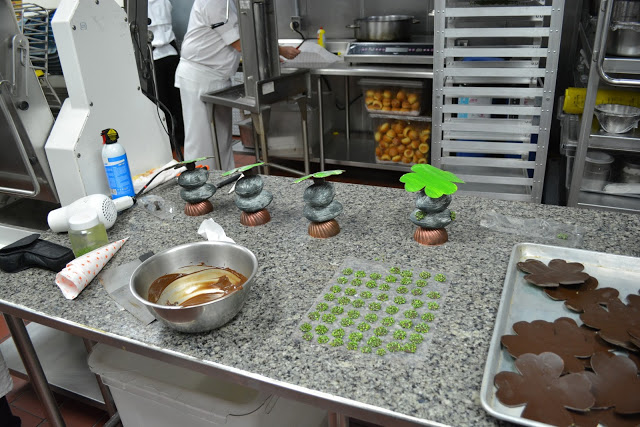 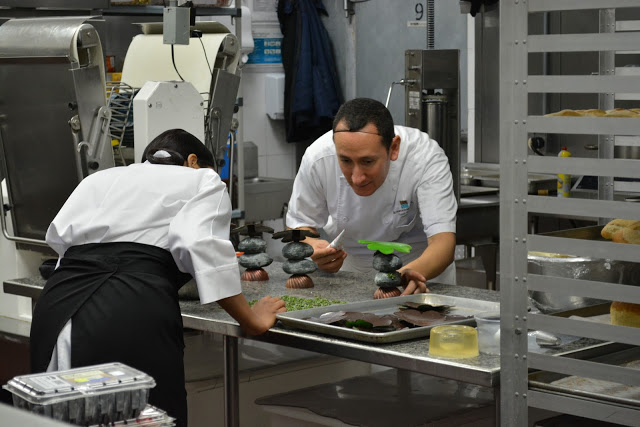 Then we moved on to the Churro Station. If you’ve had Churros and thought, ‘meh, must be easy’ – let me promptly fix that errant thought. It is not easy. Moulding the batter through the ‘Churro Press’ is hard, hard work. You see this picture of me leaning against the churro maker? I am not hiding or profoundly hugging the machine. That was me struggling to get one turn on the handle. You press the foot lever to get the dough rolling through the press, and rotate the handle clockwise to get that classic Churro shaped dough. Much like a pasta machine or a South Indian murukku acchi, but much, much harder. You then cut off what you need and fry them to perfection. Charlie, the Churro guy, was to make a whopping 1,700 of these babies for that night’s festivities. My hero! If I had to sing ‘Macho Macho man‘ to someone, it’d be him! 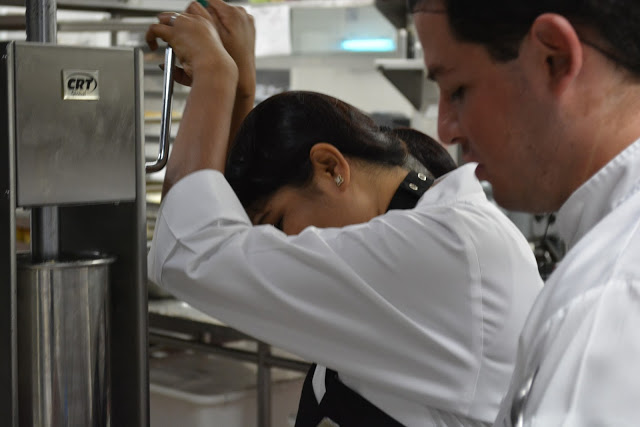 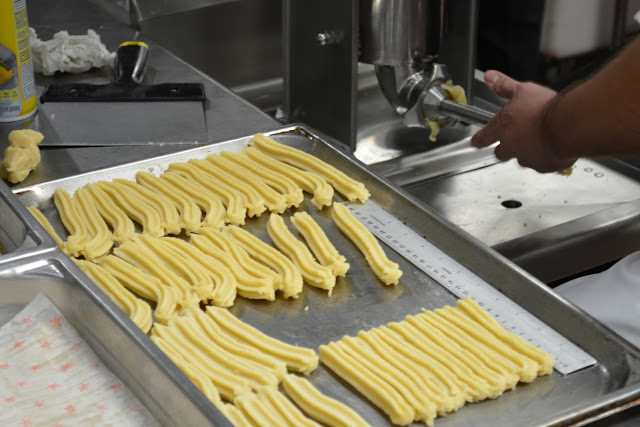 And finalmente, we moved on to ‘my’ workstation. I would be making ‘Balsamic fruits del bosque compote and mascarpone sabayòn’. Sounds fancy and new, doesn’t it? I had no clue either. But the Chef had everything in place, and all I had to do was assemble. Phew! The Mascarpone Sabayòn was prepped and chilled to perfection. With piping bags, they were piped into 28 waiting glasses. Next came the balsamic vinegar soaked sponge. Now that was where the magic truly was. It was like a secret burst of flavour hidden in a mascarpone encased treasure chest. Cover it up with more of the mascarpone and the secret is safe. Then we layer the fruits – Figs, strawberries, blackberries and blueberries – arranged in a definitive and pre-meditated fashion. Each fruit had its place, and there it went. If that wasn’t pretty enough, it was then dotted with dainty edible flowers, that shot a golden ray of colour in the dark fields of berry. 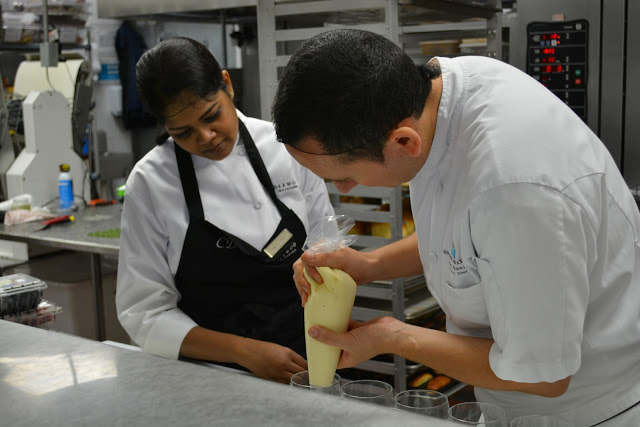 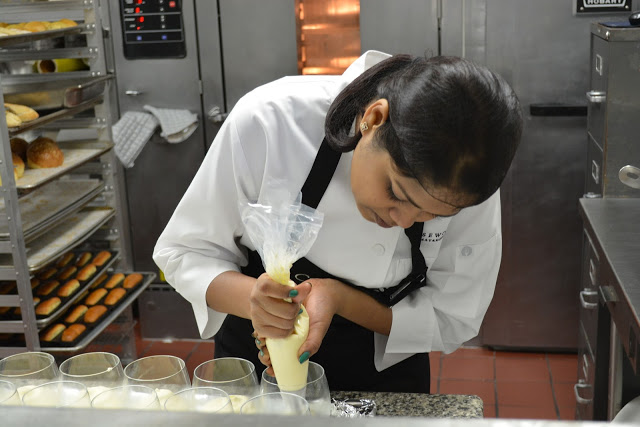 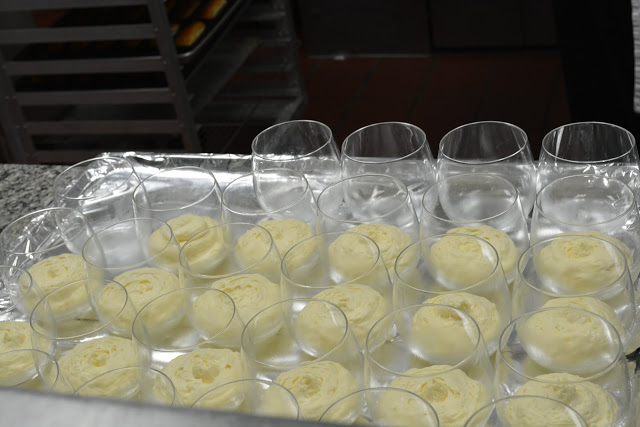 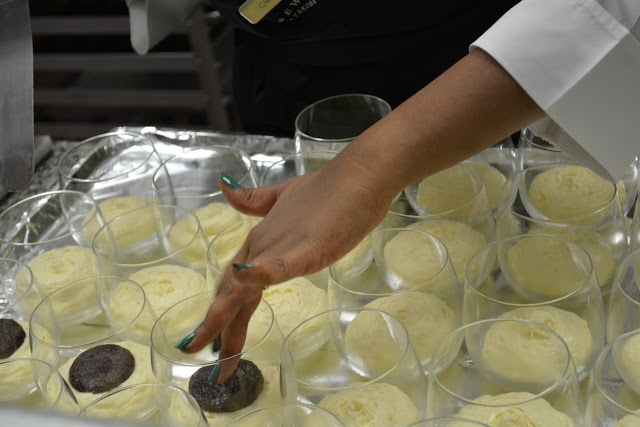 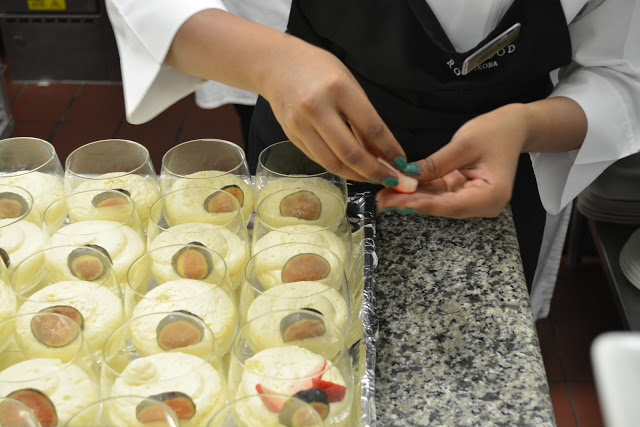 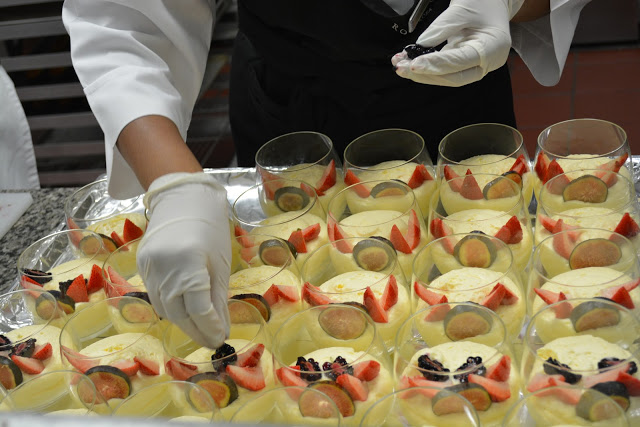 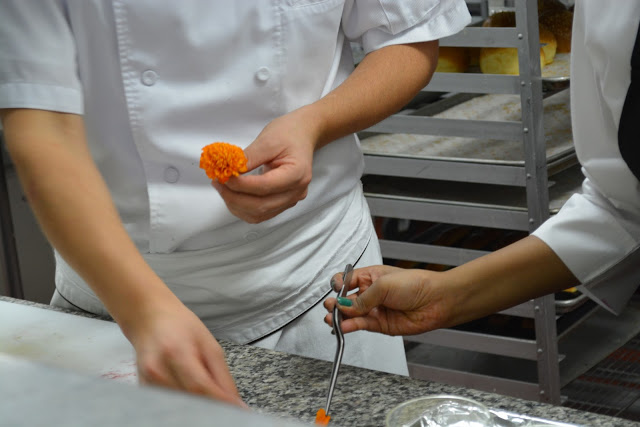 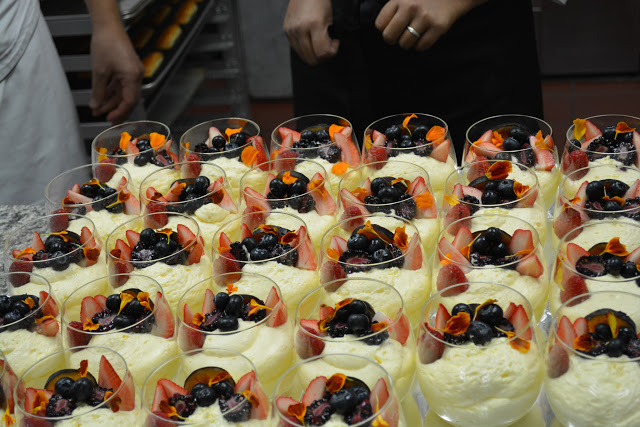 It would then be topped with a fiery red chocolate disk with a white chocolate straw darting out. But that was for later, and my time was up. I took off my apron and white jacket, and walked out a commoner.

I left the kitchen, looking back too many times, trying to remember everything I could. The rest of the day passed in a blur. Had a lovely dinner at Saffron, a Thai restaurant, dolled up in traditional Indian attire. And came back ‘home’ to the suite to discover a lovely card on the bed signed by everyone from the kitchen, my very own freshly laundered and folded apron with my initials sewn in, a framed photograph of the Chef, my husband and me, and humbly sitting beside all that, the finished dessert I helped make that morning.

I couldn’t help, but cry.

My time with Chef Fidel was humbling, because despite being a top chef, he was simple, down-to-earth and soft spoken. He spoke of how inspiration hits in unexpected places – he was talking a walk through the golf course the previous day, picked up a golf ball and decided to make a chocolate mould from it. And he is immensely thoughtful – he paid attention to something I said about me liking chocolates and my husband liking strawberries while working on the dessert – and sent us a plate of chocolate covered strawberries along with the preset dinner menu (which already had a gorgeous pana cotta for dessert). It was a passing comment and I didn’t give it much thought. But he did.

The morning we left, we had one last breakfast at the Casa del Lago. We hesitantly asked the wait-staff if the Chef had a moment to spare for us to say thanks and good bye. What we didn’t expect was that Chef Fidel would walk out of the kitchen and met us at our table. I cannot explain how important it feels when a Chef leaves the kitchen and meets you at your table, or when the entire restaurant stops eating to watch your conversation.

Looking back, I wish as well as regret doing some things. I wish I hadn’t been too star-struck to be dumbed into silence. There are so many things I could have asked him, and learnt from him. And I desperately wish I had removed my Shrek-green nail polish. Had I known it was not a spa day, but a kitchen day, I most definitely would have. But my time was up. And I cannot turn back time.

From start to finish, our stay at the Rosewood was nothing short of magical. And that is how I will always remember it to be.