The Foodie’s Travelogue is back! Discover delicious eats in the Los Angeles Area, and other fun things to do while you are there – it truly is the home of the stars! 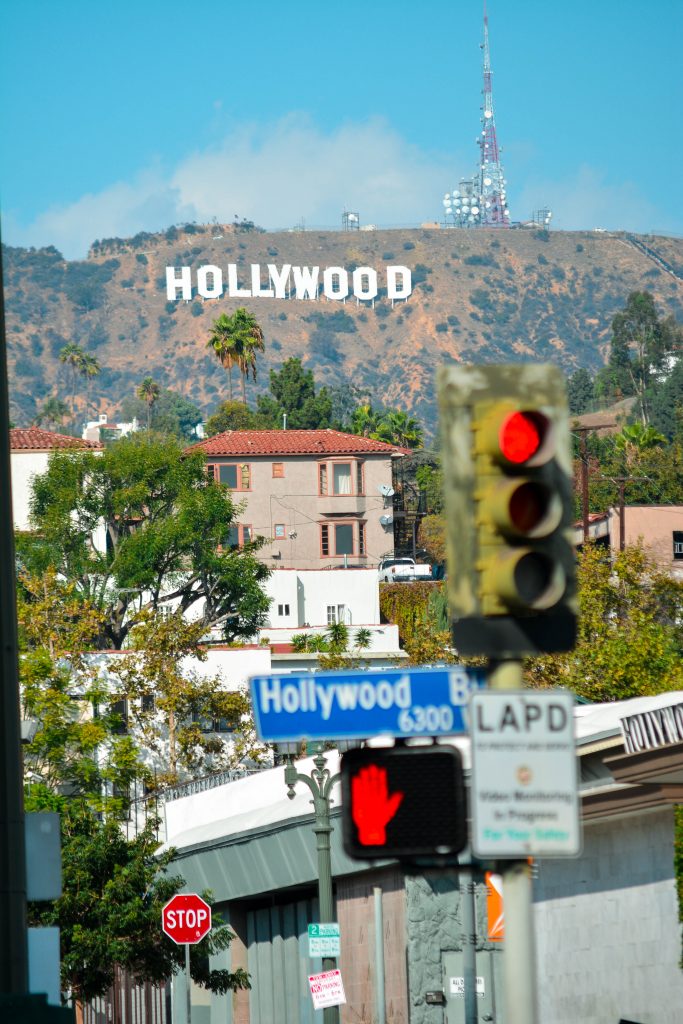 Is it time for Christmas already? This year’s been really good to me – I visited friends in Baltimore and Philly, went on my very first camping trip in North Georgia that culminated in a surprise white water rafting experience (also a first) in Tennessee, spent a very relaxing weekend in the turquoise waters and white sandy beaches of Panama city, FL and I can not think of a better way to close this year’s travelogues (I am pretty sure that I’m done for this year, although you never know!) than with my recent trip to Los Angeles + San Francisco.

Sure, it was my husband’s work that took me there, but that meant I got to spend 3 whole days getting down with Hollywood, all by my lonesome self! And I loved every second of it! A lot of people found it weird that someone could have so much fun alone, but hey! I always LOVE some me-time – the conversation in my head is just sparkling! 🙂

But what surprised me the most, was how people are extra nice to you when you are alone! I don’t think I’ve interacted with these many strangers on any trip – from wait staff to street performers (and one homeless man), everyone had something to say to the lonely girl with a camera! Like Arthur Nakane – we met at an intersection and struck up a conversation. He invited me to watch him perform at the Little Tokyo Plaza (where I was headed) and I did. I had such a good time, that I kept telling everyone about this sweet, old man I met who has this amazing joie de vivre! Turns out, he’s  somewhat of a local celebrity – a star of America’s Got Talent and the subject of his very own documentary ‘Secret Asian Man‘ – something I just found out while writing this post. WOW! Literally, random people you meet on the streets of LA turn out to be a star!

As with every trip (and my life in general), this one too revolved around food. Here are 5 AMAZING places I ate in, and if you find yourself in the area, do drop by. It’ll be totally worth your time and money! And here’s why: 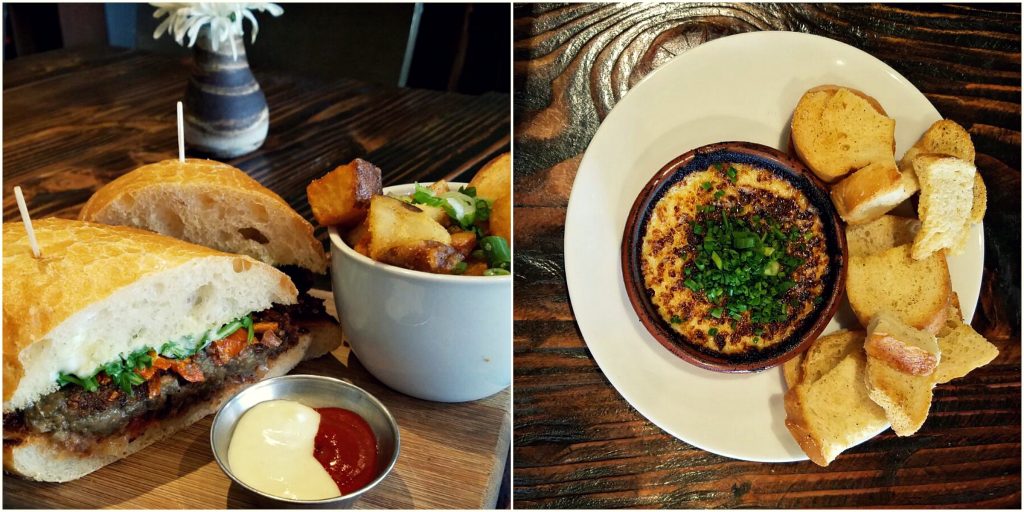 I have been to many restaurants in many cities and in at least 3 countries – but never have I had a completely ‘joyous‘ dining experience as I did here. My husband and I found ourselves at Pueblo on a Monday afternoon – granted there weren’t a lot of options for vegetarians, but what we ordered was tantalizingly good.

The Berenjenas (Eggplant sandwich) was mind-blowingly flavorful, the bread sinfully crisp, yet pillowy and the side of papitas bravas (roasted potatoes)  oddly comforting! I have promised myself that I wouldn’t rest until I have recreated this at home – with any luck, this would be the next recipe you see here at Love is in my tummy!

We also had the Queso Fundido (Melted Cheese) – but unlike the usual fare featuring cheddar, this one was made with charred goat cheese flavored with black truffle, honey and spring onions. Words cannot describe just how amazing it was – the roof of my mouth was burnt red in the heat and the crisp bread was not helping, but I could not stop until I licked that bowl clean!

But the food wasn’t all that was special about this place – it was the people! The wait staff were incredibly friendly, took the time to suggest (and describe) vegetarian options when we looked a little lost and chatted with us on and off the whole time we were there. Once we were done eating, we were so full that we had to sadly reject the dessert menu – seeing my super sad face at that last horrendous act (say ‘no’ to dessert! Sacrilége!), they brought us a teeny,tiny scoop of a homemade berry ice-cream, on the house!!! It was the perfect end to a perfect, perfect lunch!

My only regret: we had a poor appetite (best way to properly judge food, I’ve heard) that day, and had we gone with a group of friends, we could have sampled the remaining vegetarian options on the menu. Well, now that just gives me reason to go back again! And so should you! 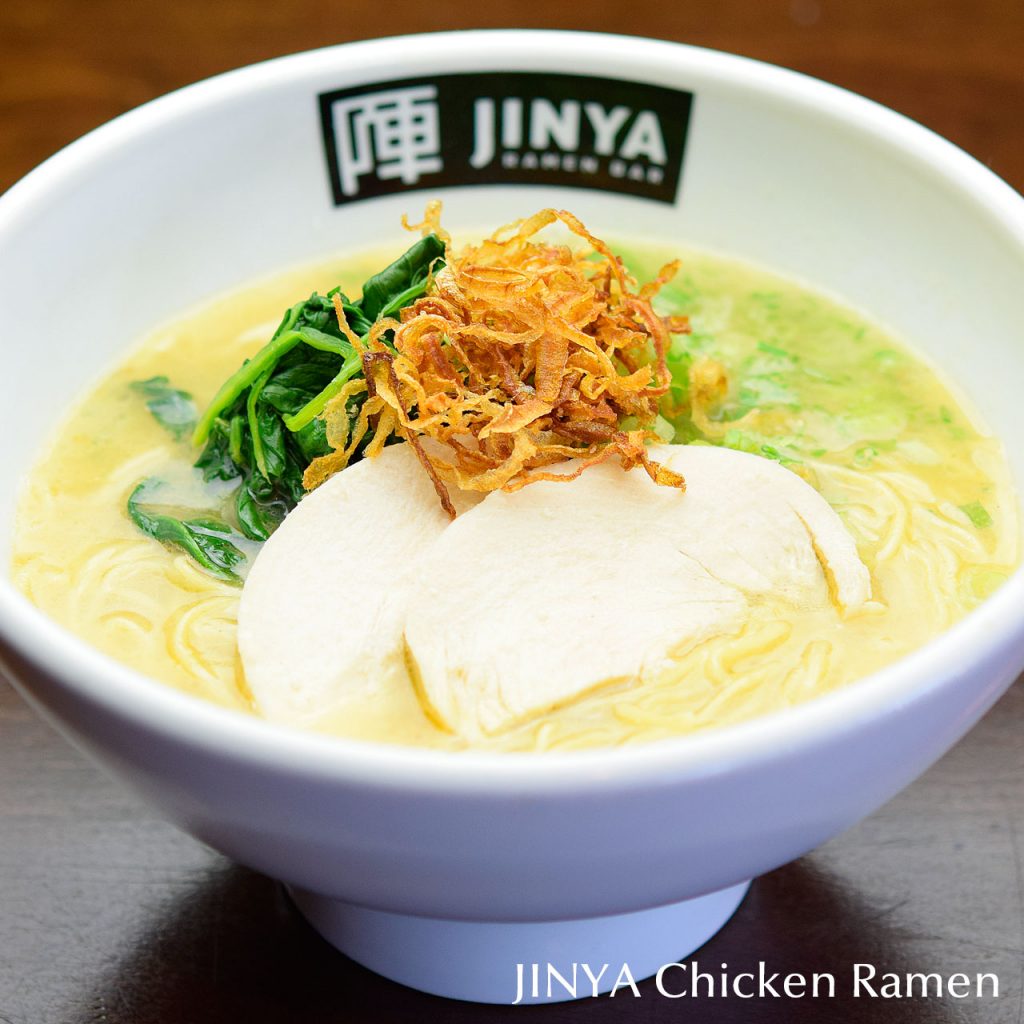 Would you be horrified if I told you that despite being an insane Japanophile, I’ve never had Ramen until now? Horror of horrors indeed – but I am so glad that I broke my Ramen ‘cherry‘ at the Jinya Ramen express. I have no parallels to compare this Ramen with, but if this is how Ramen is supposed to be, it may yet become my most favourite comfort food!

I tried the Spicy Chicken broth with thin noodles, topped with an insane number of toppings (extra crispy garlic, extra chilli oil please!) – it was sooo  good, that I found myself return the next night as well! The second night however, I was super exhausted from walking the city, that I asked them to cook my noodles a little more softer, and they happily obliged. Steaming hot bowl of Ramen while watching the bustle of the Hollywood Blvd below – it was an experience like no other!

I was too busy diving into the bowl each time that I did not have the patience or time to take pictures myself – and that should say eons about how good the food was! 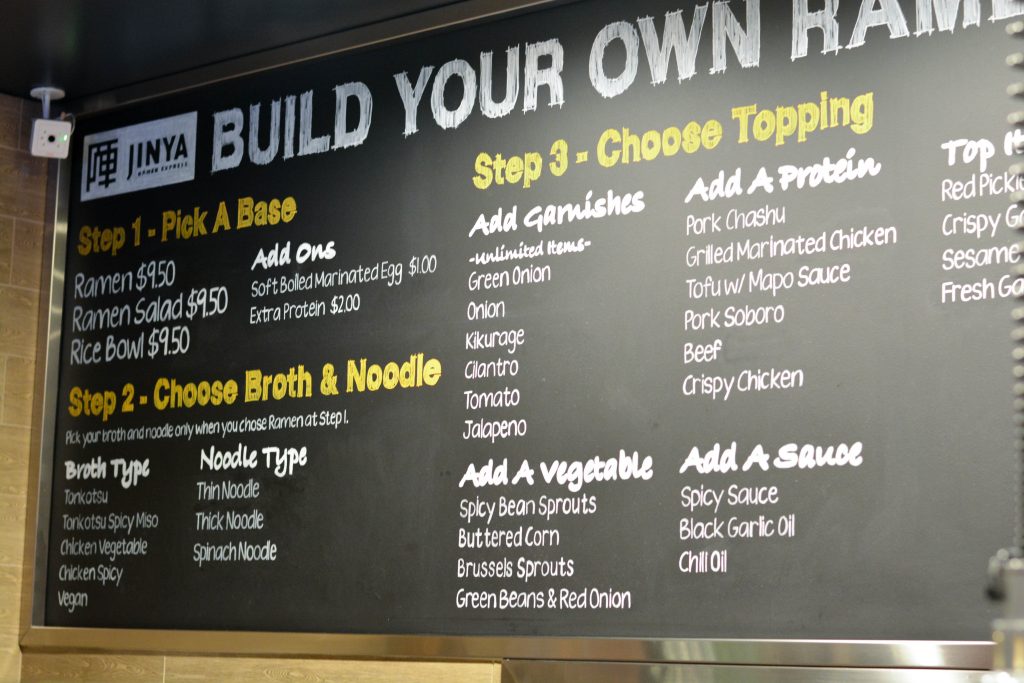 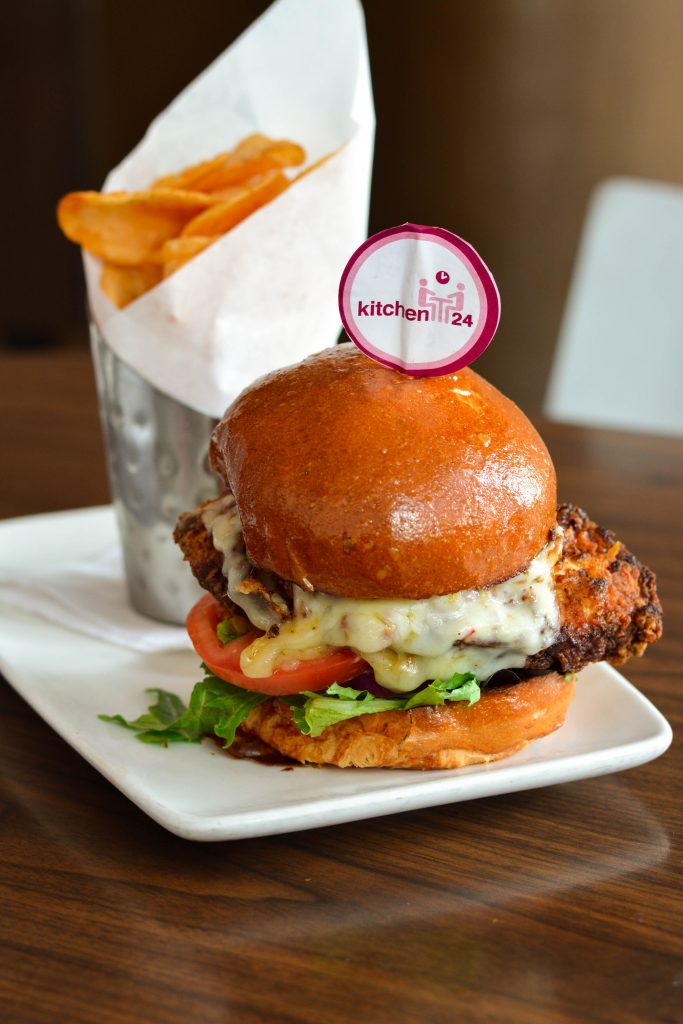 If I were to describe Kitchen24 in one word, I’d say – cute! from the candy-like booths, mini succulents on each table to the plating – it was cute, cute, cute!!!

I had their fried chicken sandwich that came with a super-soft brioche bun! Even with no apparent spices in the chicken (if there was, I couldn’t detect anything), it was still incredibly delicious! It reminded me of the plain fried chicken pieces I used to sneak out of the kitchen while my mom’s back was turned to me. In a way, it was a trip down memory lane in a very unexpected place and form!

I took my time enjoying the burger which came with a side of the most curiously thick potato chips I’ve ever had – crisp as hell and topped with a spice blend but it was each 1/8″ thick!

Can you spot me in the photo below? 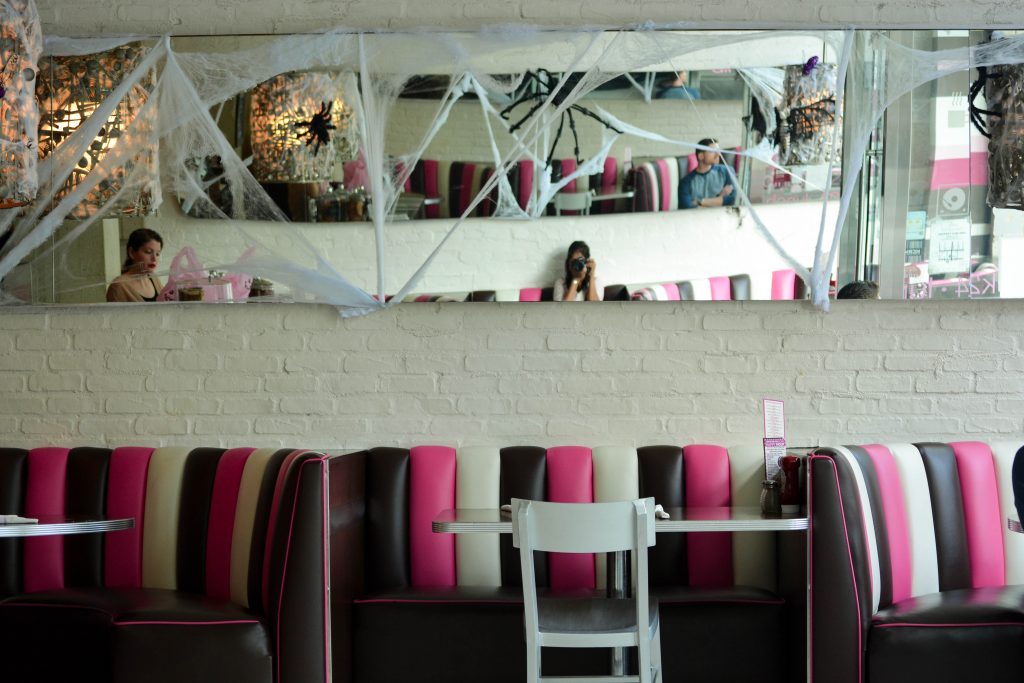 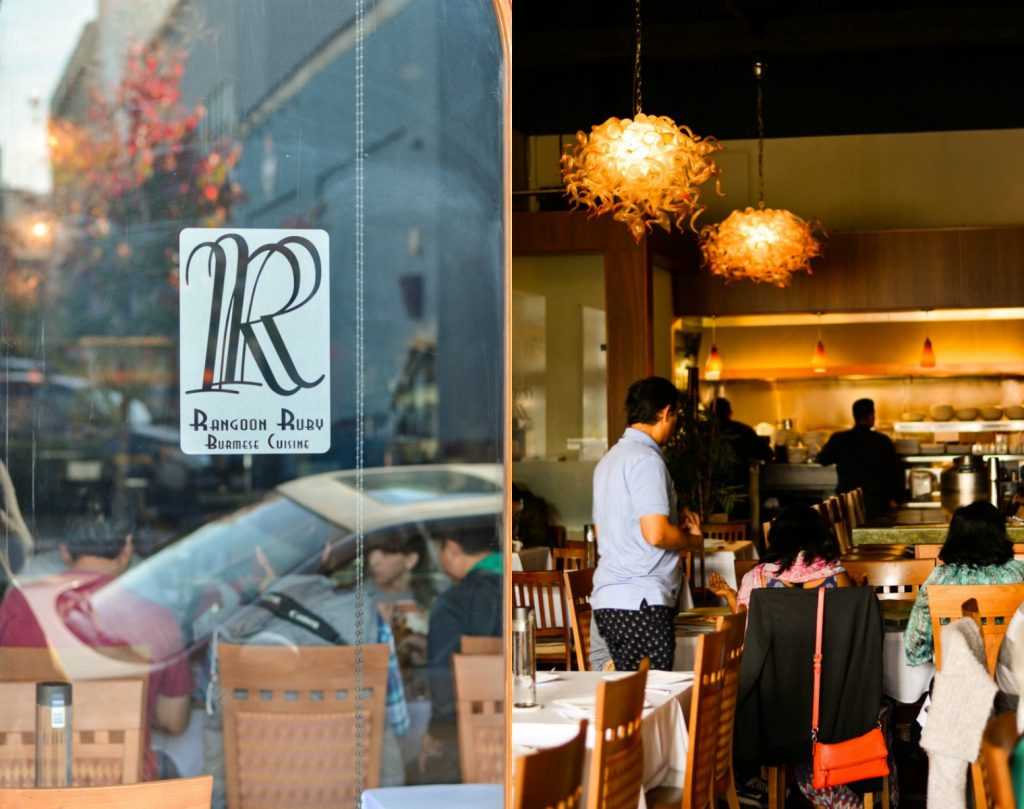 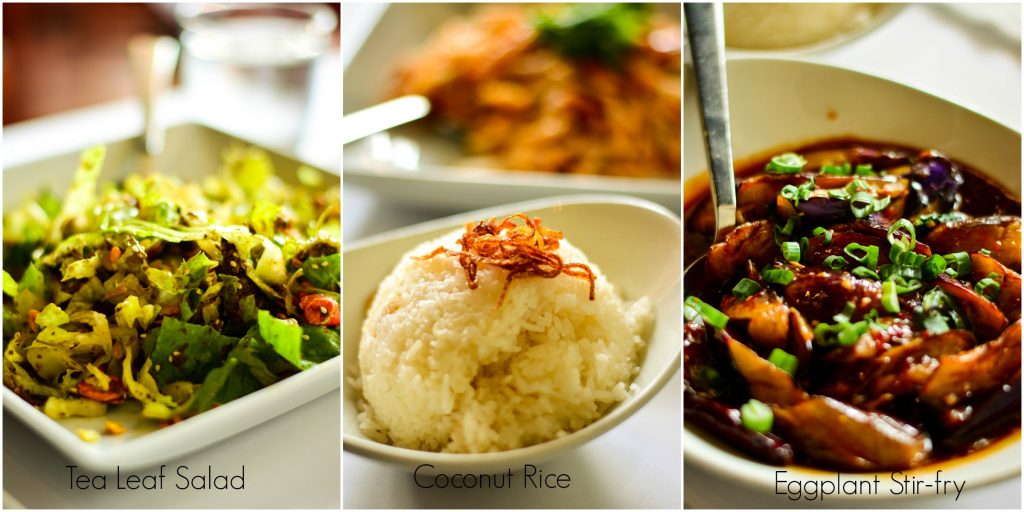 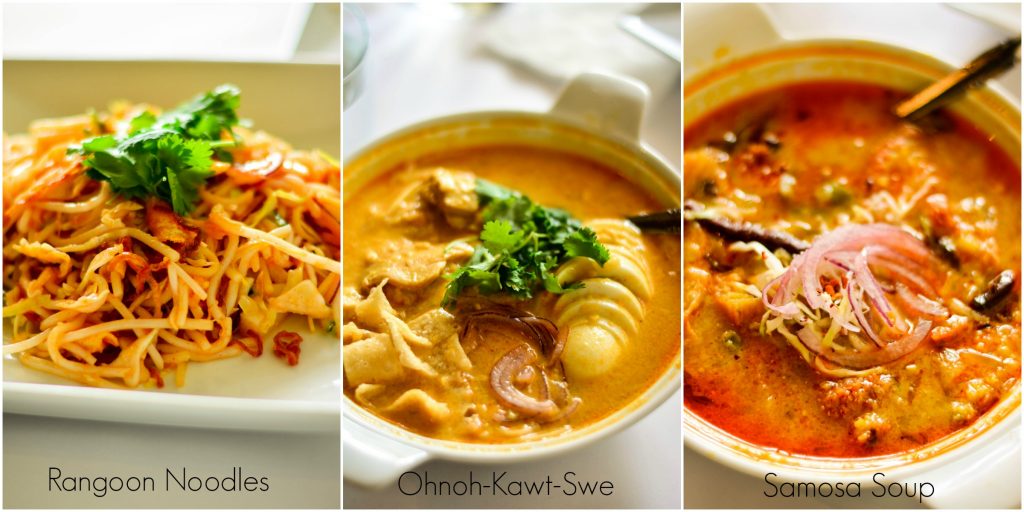 Have I mentioned that my paternal family is Indo-Burmese? Only a few thousand times, I guess. So before I went on this trip, I let my husband know with the subtlety of a sledge hammer that I would not return home without sampling Burmese food in the Bay Area.

And sample, I did! This time, I took along friends, who had already eaten there and hence could point me out to the best things on the menu.

The tea salad (Lapet-thok) of course – while it is the most celebrated Burmese dish among Americans, I was very apprehensive about the amount of tea flavour this salad would have. Turns out – none! It was extremely delicious, bursting with flavour and contrast of texture and despite the ominous green colored tea-goop (which would normally put me off), surprisingly good!

The Rangoon noodles was a cold ‘salad’ with noodles and fresh ingredients – tangy, sweet and mildly spicy – each bite wonderfully fresh!

Although the Indian in me was very excited about the Samosa soup (my husband still talks about it), the reason I truly went there was to try the Ohno-Kawt-Swe (Chicken and noodles in coconut broth). It was the very last Burmese dish that my dad cooked for me and it was deeply emotional for me to taste it again.

The only let down was the Eggplant and Garlic stir-fry – while it wasn’t particularly bad, after tasting so many dishes that were a symphony by the mouthful, the stir-fry paled in comparison because it was just another stir-fry.

I was just another kid in a candy-shop – doe-eyed and joyfully lost although my finding this place was deliberate and with purpose. The brand of chocolate I regularly bake with these days, Ghirardelli has become a pantry staple in my house. And if that wasn’t reason enough, the doorman standing at the door handing out free candy to all who walk in just about sealed the deal.

This was the modern-age Gingerbread house from Hansel and Gretel – Disney merchandise on one side, insane chocolate overload on the other. It’s every parent’s nightmare and every kid (and chocoholic’s) delight!

I walked into this store (after desisting temptation two nights in a row, I lost on the third)  with the sole intent on having ‘dinner’ at Casa Ghirardelli. That’s right – what you see below – the Treasure Island Sundae – Vanilla ice cream paired with a warm Ghirardelli® Chocolate Brownie and smothered with handmade hot fudge. Topped with whipped cream, chopped almonds and a cherry. $12  and totally worth every spoon! And that ladies and gents, was dinner on my last and final night in LA.

I am not going to waste time describing and sing praises about how good it was, or how it knocked me unconscious in a chocolate coma for the next few hours. Or about how I grabbed this to-go at the store and forgot all my shopping bags once I saw this sundae (I told myself the doubling back was going to help neutralise the billion calories in this cup)! 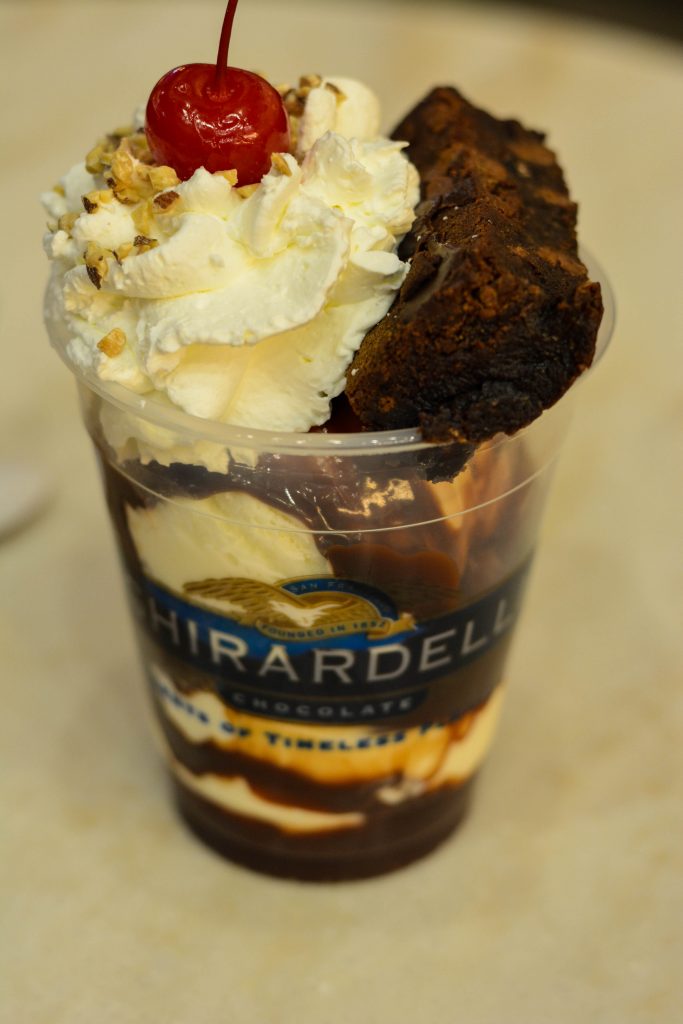 Additionally, I also went to an Ice-cream place in Palo Alto – Scoop Microcreamery. While I have no pictures to show, their long list of flavours are quite interesting – I tried Mango chutney (sweet and tangy Mango with a hint of ginger?), Brown Sugar Banana ( it was like eating banana pancakes) and Malt and Cream (which tasted shockingly like ‘Horlicks’)!

I also tried a Japanese Curry place in Little Tokyo – Curry House – I’ve always wondered what Japanese Curry tastes like (it tastes weirdly a lot like Southern Indian curry) but what I enjoyed there most was the Japanese hospitality. With traditional Japanese greetings (Irasshaimase!) and the courteous smiles, dining here was a delight! 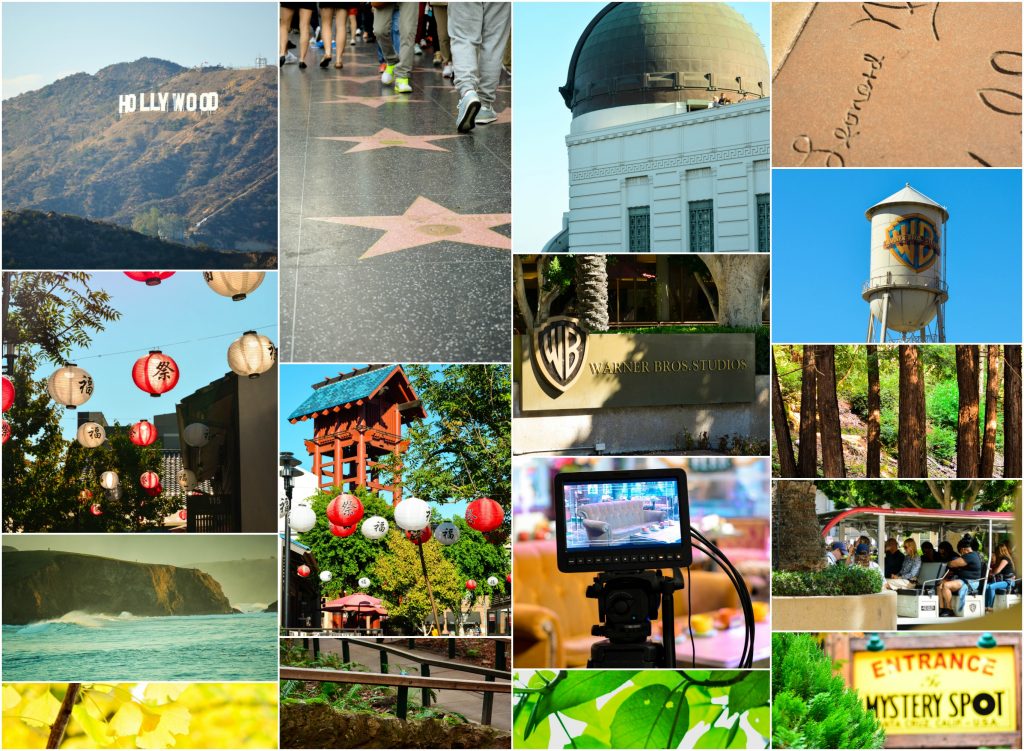 Here are some non-food things I did during my stay –

And with that, my 8-day trip came to a close – I found myself on a flight back home and while there is no place like home, the joy of exploring a city all by myself is an experience I will not soon forget!

In the words of St. Augustine, “The world is a book, and those who do not travel read only a page” – I can surely say that after this trip, I feel many a page wiser – culturally, emotionally and intellectually!

How do you feel about travelling alone? What are your favourite solo-traveller memories? Let me know in the comments below!